Gerald Calvin "Jerry" Douglas (born May 28, 1956) is an American resonator guitar and lap steel player and record producer. He has been nicknamed 'Flux.'

Douglas was born in Warren, Ohio, United States, and now lives in Nashville, Tennessee, with his wife, Jill. 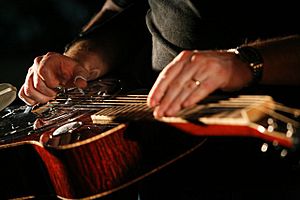 Jerry Douglas playing one of his resonator guitars

As of 2017, Douglas has been nominated for thirty-one Grammy Awards and has won fourteen Grammys.

Douglas is a 10-time recipient of the International Bluegrass Music Association ("IBMA") Dobro Player of the Year Award.

In 2004, the National Endowment for the Arts awarded Douglas a National Heritage Fellowship, which is the United States' highest honor in the folk and traditional arts.

Douglas was named Artist in Residence for the Country Music Hall of Fame and Museum in 2008.

Douglas was honored at the 36th annual Telluride Bluegrass Festival in Colorado for his twenty-fifth consecutive year playing in and at the festival.

Douglas received the Bluegrass Star Award, presented by the Bluegrass Heritage Foundation of Dallas, Texas, on October 15, 2016. The award is bestowed upon bluegrass artists who do an exemplary job of advancing traditional bluegrass music and bringing it to new audiences while preserving its character and heritage.

The Americana Music Association honored Jerry Douglas with a Lifetime Achievement Award in 2011.

Douglas received the key to the city of Manchester, Tennessee as well as to Coffee County during a performance at the 2015 Bonnaroo Music and Arts Festival.

All content from Kiddle encyclopedia articles (including the article images and facts) can be freely used under Attribution-ShareAlike license, unless stated otherwise. Cite this article:
Jerry Douglas Facts for Kids. Kiddle Encyclopedia.