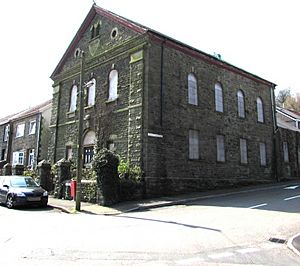 Jerusalem, Ynysybwl was a Calvinistic Methodist chapel in Thompson Street, Ynysybwl, Glamorgan, Wales. Services at Jerusalem were conducted in the Welsh language.

The church at Jerusalem dates to 1885, when meetings began to be held by a number of miners at a house in the village. In 1888 a chapel was built by William and Edward Williams of Cribinddu Farm, who became deacons at the chapel and generous financial benefactors. Rev D. Jones was the first minister.

From its earliest days, Jerusalem, like other chapels, hosted cultural events beyond the religious sphere. In 1889, the eisteddfod at Jerusalem saw the young poet J.J. Williams come to prominence.

All content from Kiddle encyclopedia articles (including the article images and facts) can be freely used under Attribution-ShareAlike license, unless stated otherwise. Cite this article:
Jerusalem, Ynysybwl Facts for Kids. Kiddle Encyclopedia.