The Jewish Women's Archive (JWA) is a national non-profit organization whose mission is to document "Jewish women's stories, elevate their voices, and inspire them to be agents of change."

JWA was founded by Gail Twersky Reimer in 1995 in Brookline, Massachusetts with the goal of using the Internet to increase awareness of and provide access to the stories of American Jewish women. JWA makes a growing collection of information, exhibits, and resources available via its website. Its activities include the conception, production and dissemination of: 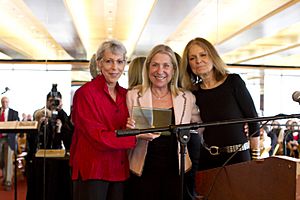 Starting in 2010, JWA also began holding an Annual Luncheon in New York City at which it honors three women for their activism and achievements. In 2010 the focus was on the Triangle Fire (2010 was the centenary of that tragedy). Honorees included Ruth J. Abram (co-founder of the Tenement Museum), Kate Frucher (attorney and entrepreneur), and journalist Lynn Sherr. In 2011 the luncheon was titled "Making Trouble / Making History." Gloria Steinem presented the awards, which were given to Elizabeth A. Sackler (The Elizabeth A. Sackler Center for Feminist Art, Brooklyn Museum), Rebecca Traister (author, Big Girls Don't Cry, journalist), and Letty Cottin Pogrebin (author, "Deborah, Golda, and Me," etc., journalist, founding editor, "Ms magazine").

Jewish Women: A Comprehensive Historical Encyclopedia, edited by Paula Hyman and Dalia Ofer, is accessible for free via JWA's website. The encyclopedia features approximately 2,000 articles on the lives and achievements of Jewish women. Articles are also disseminated via Twitter.

In 2007 JWA produced Making Trouble, a documentary film about three generations of female Jewish comedians and the complexity and challenges of their relationship to comedy, Judaism and gender. The film profiles Molly Picon, Fanny Brice, Sophie Tucker, Joan Rivers, Gilda Radner, and Wendy Wasserstein as well as contemporary comedians Judy Gold and Jackie Hoffman. The film has been screened at over 70 film festivals and other venues.

Katrina's Jewish Voices is an online exhibit of photos, blog posts, podcasts, and email messages documenting the experience of the Jewish community during and after Hurricane Katrina, produced in collaboration with the Center for History and New Media at George Mason University In partnership with the Institute for Southern Jewish History, JWA conducted 85 interviews with members of the New Orleans, Baton Rouge, and Gulf Coast Jewish communities which are included in the exhibit. Other online exhibits include Jewish Women and the Feminist Revolution, History Makers: Women of Valor and Women Who Dared: Contemporary Activists.

We Remember is an online collection of personal reflections and reminiscences about recently deceased notable American Jewish women. This Week in History is a calendar of events that matches the current date with events in Jewish women's history.

All content from Kiddle encyclopedia articles (including the article images and facts) can be freely used under Attribution-ShareAlike license, unless stated otherwise. Cite this article:
Jewish Women's Archive Facts for Kids. Kiddle Encyclopedia.