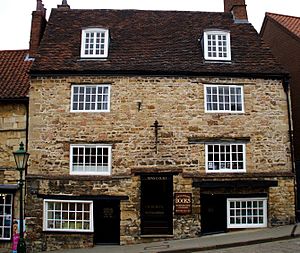 Jews' Court is the headquarters of the Society for Lincolnshire History and Archaeology. The Jews' Court is a building which contains some Norman stonework on Steep Hill in Lincoln, immediately above Jew's House. It is dated to between 1150 and 1180. The Jews Court is a Grade I listed building and a recent architectural survey has shown that there is very little medieval stonework above basement level in the existing building. Documentary evidence of 1290 when the Jewish community of Lincoln were expelled now shows that the Jews' Court has always been divided into two houses and a charter of 1316 mentions that a Jewish scola or synagogue had stood to the west in the tenement behind these two houses.

In 1910, a well was dug in the basement of the building; the owner subsequently claimed that this was where the body of Little Saint Hugh of Lincoln had been found and charged people to see it.

In 1992, the Lincolnshire Jewish Community, which is affiliated with Liberal Judaism, started to hold regular shabbat services in a lecture and meeting room in the building. These are held on the first and the third Sabbath of each month as well as on the High Holy Days

All content from Kiddle encyclopedia articles (including the article images and facts) can be freely used under Attribution-ShareAlike license, unless stated otherwise. Cite this article:
Jews' Court, Lincoln Facts for Kids. Kiddle Encyclopedia.