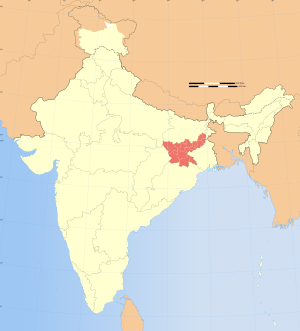 Location map of the Indian state of Jharkhand

Jharkhandi cuisine encompasses the cuisine of the Indian state of Jharkhand. Staple food of Jharkhand are rice, dal, vegetable and tubers. Common meals often consist of vegetables that are cooked in various ways, such as curried, fried, roasted and boiled. Traditional dishes of Jharkhand may not be available at restaurants. However, on a visit to a local village, one can get a chance to taste such exotic foods. Some dish preparations may be mild with a low oil and spice content, although pickles and festive dishes may have such characteristics. 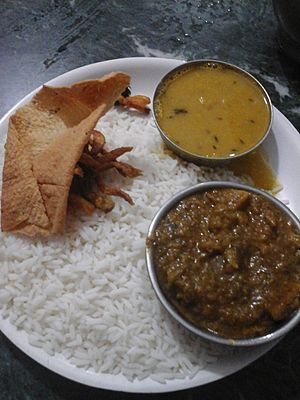 All content from Kiddle encyclopedia articles (including the article images and facts) can be freely used under Attribution-ShareAlike license, unless stated otherwise. Cite this article:
Jharkhandi cuisine Facts for Kids. Kiddle Encyclopedia.