James "Jimmie" Crawford Angel (August 1, 1899 – December 8, 1956) was an American aviator after whom Angel Falls in Venezuela, the tallest waterfall in the world, is named.

James Crawford Angel was born August 1, 1899, near Cedar Valley, Missouri, the son of Glenn Davis Angel and Margaret Belle (Marshall) Angel. Because his grandfather, James Edward Angel, was living, he was called Crawford to avoid confusion in the Angel family during his younger years. He is alleged to have been in World War I, but the only certainty is that he registered for the draft on September 12, 1918. In his twenties he adopted the nickname "Jimmie" by which he was known for the rest of his life.

The falls, which cascade from the top of Auyantepui in the remote Gran Sabana region of Venezuela, were not known to the outside world until Jimmie Angel flew over them on November 18, 1933 while searching for a valuable ore bed.

On October 9, 1937, he returned to the falls with the intention of landing. On board his Flamingo monoplane was his second wife Marie, Gustavo Heny, and Miguel Delgado, Heny's gardener. He attempted a landing, but despite a successful touchdown, his aircraft El Rio Caroní nose-dived when it hit soft ground at the end of its landing run - the wheels sank in the mud, making take-off impossible.

The passengers were unharmed but had to trek across difficult terrain and with low food supplies for 11 days to make their way off the tepui and down to the nearest settlement at Kamarata. When word got out of their exploits, international interest in the Gran Sabana region increased dramatically, leading to in-depth scientific exploration in the following years.

His aircraft remained atop Auyantepui until 1970, when it was disassembled and brought down by Venezuelan military helicopters. Today, an El Rio Caroní can be seen outside the airport terminal at Ciudad Bolívar. The airplane was re-assembled in the city of Maracay's aviation museum. 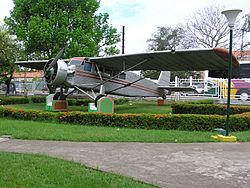 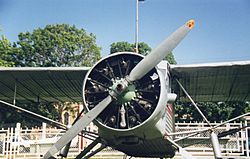 On April 17, 1956, Angel suffered a head injury whilst landing his plane at David, Chiriquí, Panama. Soon afterwards, he had a heart attack and then suffered from various ailments for eight months, until he came down with pneumonia and went to Gorgas Hospital in Panama City, where he died on December 8, 1956. His cremated remains were first interred at the Portal of the Folded Wings Shrine to Aviation in Burbank, California, but in keeping with his wishes, his wife, his two sons and two of his friends scattered his ashes over Angel Falls on July 2, 1960.

All content from Kiddle encyclopedia articles (including the article images and facts) can be freely used under Attribution-ShareAlike license, unless stated otherwise. Cite this article:
Jimmie Angel Facts for Kids. Kiddle Encyclopedia.