Joachim Sauer (born 19 April 1949) is a German quantum chemist and full professor at the Humboldt University of Berlin. He is the husband of the Chancellor of Germany, Angela Merkel. He is one of the seven members of the board of trustees of the Friede Springer Foundation, together with former German President Horst Köhler and others.

Joachim Sauer was born in Hosena, a small town in the marshy Lusatian countryside between Dresden and Cottbus. He grew up with his twin sister and an elder brother. His father, Richard Sauer, had trained as a baker (Konditor), but worked as an insurance representative. Sauer excelled at school and it quickly became clear that he had both the ability and the ambition to achieve more than this in his own life. 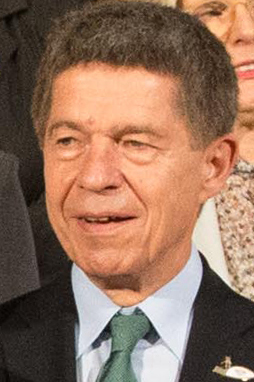 Sauer studied chemistry from 1967 to 1972 at the Humboldt University of Berlin and was awarded a doctorate in chemistry in 1974. He continued to do research there until 1977 when he joined the Academy of Sciences, Central Institute of Physical Chemistry in Berlin, one of the leading scientific institutes of the former GDR (East Germany).

For a brief time during and after the German reunification (1990–1991) he was the Deputy Technical Director (Catalysis and Sorption) for BIOSYM Technologies, San Diego/USA (now Accelrys). He remained an advisor for BIOSYM until 2002.

In 1992, he joined the Max Planck Society as Head of the Quantum Chemistry Group in Berlin. Since 1993, he has been a full professor of Physical and Theoretical Chemistry at the Humboldt University of Berlin. He is an active research scientist in quantum chemistry and computational chemistry. 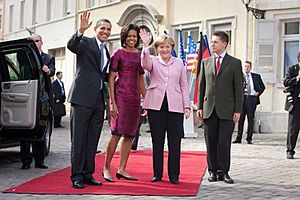 From his previous marriage to a fellow chemist, Sauer has two sons, Daniel and Adrian. On 30 December 1998, he married Angela Merkel (herself a doctor of physics who had once worked in quantum chemistry research), who later became chairwoman of the Christian Democratic Union and on 22 November 2005, the first female Chancellor of Germany.

All content from Kiddle encyclopedia articles (including the article images and facts) can be freely used under Attribution-ShareAlike license, unless stated otherwise. Cite this article:
Joachim Sauer Facts for Kids. Kiddle Encyclopedia.