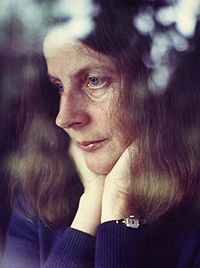 Joan Benson (October 9, 1925 – January 1, 2020) was an American keyboard player. Her works focused on the clavichord and fortepiano. She was born in Saint Paul, Minnesota.

All content from Kiddle encyclopedia articles (including the article images and facts) can be freely used under Attribution-ShareAlike license, unless stated otherwise. Cite this article:
Joan Benson Facts for Kids. Kiddle Encyclopedia.