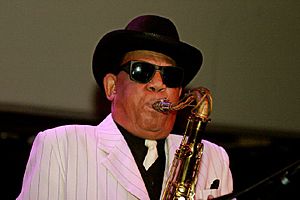 Houston formed his own band The Rockets, and moved to Los Angeles in 1952. He scored his only two chart hit singles in 1952 with "Worry, Worry, Worry" and "Hard Time Baby" both of which peaked at #10 on Billboard's R&B singles chart.

Houston's musical career ended after he suffered a stroke in 2005. He died on December 28, 2015 in Long Beach, California, following a series of strokes, aged 89.

All content from Kiddle encyclopedia articles (including the article images and facts) can be freely used under Attribution-ShareAlike license, unless stated otherwise. Cite this article:
Joe Houston Facts for Kids. Kiddle Encyclopedia.