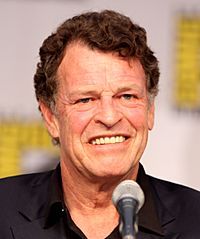 John Noble (born 20 August 1948) is an Australian actor and theatre director. He was born in Port Pirie, South Australia.

He is best known for his roles as Dr. Walter Bishop in the US Fox science fiction television series Fringe and Henry Parrish in the Fox action-horror series Sleepy Hollow. His best known movie role was as Denethor in Peter Jackson's The Lord of the Rings trilogy.

He also provided the voice of the DC Comics supervillain Scarecrow in the 2015 video game Batman: Arkham Knight.

In 2015, he joined the main cast of the television series Elementary as Sherlock Holmes's father. He was also cast as a doctor in the Australian TV series All Saints.

In 2012, Noble was diagnosed with osteoporosis.

All content from Kiddle encyclopedia articles (including the article images and facts) can be freely used under Attribution-ShareAlike license, unless stated otherwise. Cite this article:
John Noble Facts for Kids. Kiddle Encyclopedia.