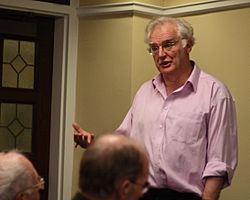 John Victor Pickstone (29 May 1944 – 12 February 2014) was an English historian of science. He was the Wellcome Research Professor in the Centre for the History of Science, Technology and Medicine, in the Faculty of Life Sciences of the University of Manchester. He was born and raised in Burnley, Lancashire.

Pickstone died after a short illness on 12 February 2014. He was aged 69. He was outlived by his wife and two sons.

All content from Kiddle encyclopedia articles (including the article images and facts) can be freely used under Attribution-ShareAlike license, unless stated otherwise. Cite this article:
John Pickstone Facts for Kids. Kiddle Encyclopedia.