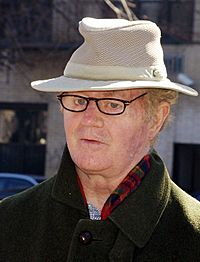 Jonathan Edward Schell (August 21, 1943 – March 25, 2014) was an American writer. He was also a visiting fellow at Yale University. He is best known for campaigning against nuclear weapons. He was born in New York City, New York.

Schell died from cancer on March 25, 2014 at his home in the New York City borough of Brooklyn. He was 70 years old.

All content from Kiddle encyclopedia articles (including the article images and facts) can be freely used under Attribution-ShareAlike license, unless stated otherwise. Cite this article:
Jonathan Schell Facts for Kids. Kiddle Encyclopedia.