Joonas Donskoi (born 13 April 1992) is a Finnish professional ice hockey forward currently playing for the Seattle Kraken of the National Hockey League (NHL). He has also played with the San Jose Sharks and the Colorado Avalanche. 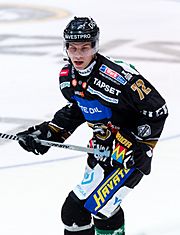 Donskoi during his tenure with Kärpät.

Donskoi continued his offensive growth setting career high of 19 goals and 49 points in the 2014–15 season with Kärpät, 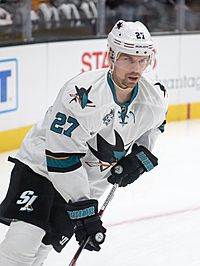 Donskoi during his tenure with the San Jose Sharks.

With his NHL rights relinquished by the Panthers, Donskoi was signed to a two-year entry-level contract with the San Jose Sharks on 20 May 2015.

In his first training camp and pre-season with the Sharks, Donskoi impressed and made the club's opening night roster for the 2015–16 season. Donskoi scored his first NHL goal in his first NHL game, 7 October 2015, against Jonathan Quick of the Los Angeles Kings. Donskoi surpassed expectations with the Sharks, cementing a regular roster position amongst the Sharks offense. In 76 games with San Jose, he compiled 11 goals and 25 assists for 36 points. Helping the Sharks reach the postseason, Donskoi appeared in every game, contributing with 12 points in 23 games as the club reached the Stanley Cup finals for the first time in franchise history. In Game 3 of the 2016 Stanley Cup Finals, Donskoi scored the game-winning goal in overtime, but the team lost the series in six games to the Pittsburgh Penguins.

He would record 28 goals and 31 assists over the next two seasons with the Sharks before becoming a free agent.

As a free agent from the Sharks, Donskoi signed a four-year, $15.6 million contract with the Colorado Avalanche on 1 July 2019. Donskoi recorded 16 goals and 17 assists during the 2019–20 season, which was halted in March due to the COVID-19 pandemic.

On 21 July 2021, Donskoi was selected from the Avalanche at the 2021 NHL Expansion Draft by the Seattle Kraken.

Donskoi is one of six children; he has three brothers and two sisters. In his free time, he is interested in cars and skateboarding. After the 2019 Stanley Cup playoffs, he returned to Finland and paid off the debt of a skating park his childhood friend owned. He has Russian roots from his great-grandfather or grandfather.

All content from Kiddle encyclopedia articles (including the article images and facts) can be freely used under Attribution-ShareAlike license, unless stated otherwise. Cite this article:
Joonas Donskoi Facts for Kids. Kiddle Encyclopedia.