Josephine Hopper (born Josephine Verstille Nivison; usually referred to as Jo Hopper or Josephine N. Hopper) (18 March 1883 – 6 March 1968) was an American painter. She is best known today as the wife of Edward Hopper, whom she married in 1924.

She was born in Manhattan into a lower class family. Her parents were Eldorado Nivison, a music teacher and unsuccessful pianist, and Mary Ann McGrath. She was the second child, but the family's firstborn died in childhood sometime after 1883. Jo's younger brother Charles was born in 1884. Later in life Jo recounted that her father had practically no paternal instincts, and the family's existence was always troubled. The Nivisons moved frequently, though always staying in New York City; apparently Jo's father made her life at home difficult, but at the same time instilled in her an interest in art, dance, and the French language.

In 1900 Jo enrolled in the Normal College of the City of New York (now Hunter College), a free teacher-training school for young women. She received a Bachelor of Arts degree in 1904 and decided to study art and eventually try to become an artist—already at college she started drawing and performing in productions of the drama club there. In late 1905 at the New York School of Art she met Robert Henri, who soon asked her to pose for a portrait (The Art Student, 1906). In February 1906 Jo began her career as public school teacher. During the next decade she earned her living by teaching, but never abandoned art and remained in touch with Henri and many other artists; in 1907 she travelled to Europe with Henri and some of his students. By 1915 she joined the Washington Square Players as actress and performed in their productions. During the summers she frequented various New England art colonies.

By 1918 Jo was seeking a change of scene and a new job. She unsuccessfully applied for a job with the Red Cross, seeking to go abroad again. World War I was still on, and she signed up to do hospital work overseas. Taking a leave of absence from the New York City public schools, Jo left in late 1918 only to return in January 1919, ill with bronchitis. She was discharged by the Surgeon General in June, and discovered that she had lost her teaching position. Penniless and homeless, she found temporary shelter thanks to an old sexton at the Church of the Ascension who had helped her after seeing her weeping in the church. It wasn't until a year later that Jo won the right for another job from the Board of Education; after that, she continued teaching and pursuing a career in art.

She first met her future husband Edward Hopper in art school, and then again in 1914 in Ogunquit where they were staying in the same boarding house. However, their friendship apparently only began some years later. Their relationship became much closer during the summer of 1923, when they were both living in an art colony on Gloucester. After a courtship that lasted for about a year, the couple was married on 9 July 1924. They remained together until Edward Hopper's death in 1967. Jo modeled for the figures in most of her husband's paintings after 1924. Edward Hopper only produced one oil painting of his wife (Jo Painting (1936)), but frequently made watercolors, drawings and caricatures of her. Throughout her married life Jo kept extensive diaries (currently in a private collection) that recount her life with Edward and his creative process. These diaries also reveal that the marriage was very troubled: the couple had frequent rows that sometimes escalated into actual fighting.

As Edward Hopper's career soared soon after the marriage and his reputation continued to grow, Jo's artistic career waned after the 1920s. Although she participated in a few group exhibitions (the biggest was organized by Herman Gulack in 1958 at the Greenwich Gallery), there was little positive reaction to her work. After her husband died in 1967, Jo bequeathed her entire artistic estate (and that of her husband) to the Whitney Museum of American Art. However, the museum discarded most of her work and has never shown any of it since her death in 1968; only a few of her works survive, and a few more are known from photographs Jo made.

As Edward Hopper's wife and companion for more than 40 years, Jo influenced his work in numerous ways. Perhaps most importantly, it was her example that inspired Edward to seriously take up watercolor, during the summer of 1923. A number of Jo's works depict motifs that would later become important for her husband. The watercolor Shacks, done in 1923, depicts two houses behind a dead tree, a subject similar to many of Hopper's later works. Jo's watercolor Movie Theater—Gloucester (c. 1926–27) foreshadowed Edward's interest in depicting movie theaters: he produced a drypoint of the subject in 1928, and then returned to it occasionally, most famously in the oil New York Movie (1939).

Since about 1924–25, i.e. almost immediately after their marriage, Jo became her husband's only model. It was also Jo who thought up the names for a number of her husband's paintings, including one of the most famous oils, Nighthawks. Despite their complicated relationship, she would also help with advice when Edward felt insecure about a painting in progress, as in, for example, the case of Five A.M. (1937). As late as 1936 Jo reported that her husband was highly competitive, and that her starting a work would frequently inspire Edward to start his own. 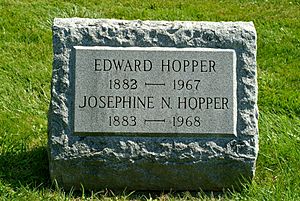 All content from Kiddle encyclopedia articles (including the article images and facts) can be freely used under Attribution-ShareAlike license, unless stated otherwise. Cite this article:
Josephine Hopper Facts for Kids. Kiddle Encyclopedia.