Josh Cahill (born 17 June 1986) is a German-Czech travel vlogger and airline critic who is best known for presenting airline reviews on his YouTube channel. He is also a blogger.

Josh Cahill's currently used vlog logo, seen on every beginning of his videos.

Josh Cahill was born to a German father and a Czech mother in Australia. He grew up in a municipality in Germany called Mildenau. 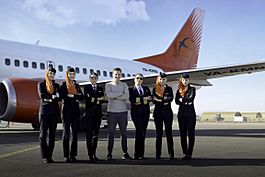 Cahill started traveling in 2005 with his first trip to Lithuania.

In 2009, he hitchhiked from Germany to Iran, stating that "getting lost in Iran" has changed his life as well as his perspective on travel. In 2013, Cahill founded his award-winning blog Go Travel Your Way, with a strong focus on airline reviews and exotic travel destinations. He received some media attention for traveling to Afghanistan as a tourist in 2015 as well as to North Korea in 2017, which he described as one of his most exciting trips to date.

In July 2015, Cahill posted his first flight review on his YouTube channel and ever since received over 100 Million views, making him one of the most watched flight reviewer on the internet. He flies at an average of 150 times per year, and has travelled to more than 90 countries. His most-watched review has over 17 million views.

The Mashable news website once described Cahill as "The award-winning blogger-turned-vlogger [who] is best known for posting honest, fair, and balanced reviews on flights he has taken."

On December 22, 2020, Cahill was part of the historical delivery of Uganda Airlines first Airbus A330-800 from Toulouse to Entebbe led by General Katumba Wamala, the then Ugandan Minister of Works and Transport and received by Uganda's President Yoweri Museveni.

On February 24, 2021, Cahill documented Afghanistan’s historical first ever all-female crew flight on Kam Air which he helped to organise. The airlines first female Afghan pilot, 22-year-old Mohadese Mirzaee, joined Captain Veronica Borysova from Ukraine in piloting the Boeing 737-500 from Hamid Karzai International Airport in Kabul to Herat. The flight took 90 minutes. Cahill described the moment as historic, "given that during the Taliban occupation, women [in Afghanistan] had no rights". The event made global headlines, and was featured on the BBC, DW and the Business Insider. It was later revealed that both, the airline and Cahill received threats by the Taliban who were opposed to the idea.

In April 2021, Cahill received the AeroTime Aviation Achievement Award 2021 for covering the Kam Air flight and "In recognition of his dedication to the aviation industry, for his focus on equality and to promoting diversity and inclusion in the sector." The Award was presented to him by former EU Ambassador to Afghanistan, Vygaudas Ušackas.

"Nobody [on that flight] deserved to wear that beautiful uniform, because I've had greater flights and better experiences with Malaysia Airlines before."

In 2018, Cahill posted a Malaysia Airlines review. He called the food tray "filthy" and complained the zero response towards his complaint that the inflight entertainment system (IFE) wasn't working. He used the inflight Wi-Fi to post an update on Instagram. Soon after, he received a message the Head of Customer Experience, asking if he has anything that "has transpired so far." After the post, the crew did not serve him, followed by a prohibition to film, though he was granted permission prior the flight. The crew approached him and asked stiffly "Who did you message?" A Malaysia Airlines policy has prohibited it before if the passenger "fail to comply with any instruction of the crew." Cahill said that the crew were "unfriendly."

After he landed, a public relations worker met with him and had a civil conversation. He also received an apology email from CEO Izham Ismail; Cahill said that it was a "template email," and that "it was clearly to prevent me from getting more footage and create a bad review on my YouTube channel." He said that "This is not only an insult to the people of Malaysia, but this is an insult to the entire country of Malaysia, because Malaysia is a country [that’s] all about hospitality and great, warm-hearted people."

The airline offered Cahill a refund but he suggested to donate the money to the Make-a-Wish Foundation instead. It was later revealed that the airline never donated the refund to the charity.

On January 7, 2020, Cahill posted an 11-minute review of his Singapore Airlines (SQ) flight from London to Singapore. He said that the cabin crew was "the biggest let down" of the flight," specifically that they had "zero engagement policy." He said that it was "not worth a dollar," but reassured that "it's a brilliant product."

The video caused Cahill to face backlash on the Internet. Some asked him not to "judge or make conclusions based on one flight," while another one recommends business or first class for a more personal crew. He has also received racist and abusive comments, among them was by someone claiming to be a Singapore Airlines crew calling him an "Ang mo piece of s***, if I see you onboard SQ again, I will cut your throat and s**t on your head, you entitled s***. Our cabin crew f***ing hates you." There had been over 100 abusive messages on social media as quoted by Today. Cahill responds with, "All I provided was honest feedback based on my experiences." Cahill said that he had gotten in touch with proper authorities asking for the account holder giving him a death threat to be tracked. The authorities responded by saying that if the allegations are true, "appropriate actions will be taken."

It was then revealed that Cahill's girlfriend Seraphina Yong is a Singapore Airlines crew; she has also been messaged asking if she is really sure to continue engaging with Cahill. She said that there is "nothing wrong with speaking the truth".

Must Share A News, a news publication, said that the backlash was due to "Singaporeans having a misplaced sense of nationalism" over their flag carrier. It also suggested that Singapore Airlines should not be overambitious with their airline.

In 2020, Cahill flew onboard a Tunisair Airbus A330, and shared his "unpleasant experience" at its lounge at Tunis-Carthage International Airport as well as onboard. Central director of communication Sami Blidi said that certain services were closed to the public amid the COVID-19 pandemic. Blidi also criticized Cahill for not wearing a face mask as part of health protocols, and said that the lounge isn't open until 5am.

Cahill then took to Instagram to criticize Blidi's allegations, saying that he entered the lounge at 5:15am. Those claims were later backed by the online news channel AJ+ which published screenshots that showed Cahill inside the lounge at 5:17am. He demanded for a better flag carrier from the "beautiful" country. He received great support on the Internet for exposing the airline.

Later on, Tunisian actor Dhaffer L'Abidine joined Cahill's efforts by posting a video on his Instagram channel too, showing a broken and dirty seat. He posted "the best way to fight this incompetence and corruption is to reveal the truth".

All content from Kiddle encyclopedia articles (including the article images and facts) can be freely used under Attribution-ShareAlike license, unless stated otherwise. Cite this article:
Josh Cahill Facts for Kids. Kiddle Encyclopedia.