Kids Encyclopedia Facts
This page is about the medieval castle in Brittany, France. For the house in Omaha, USA, see Joslyn Castle. 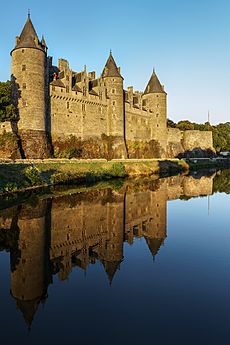 Josselin Castle and the River Oust

Josselin Castle (French: Château de Josselin, Breton: Kastell Josilin, Latin: Castellum Joscelini) is a medieval castle at Josselin, in the Morbihan department of Brittany, France, first built in 1008 by Guéthénoc, viscount of Porhoët. The town and castle were named after Guéthénoc's son, Goscelinus, and rebuilt at various times since. The current castle was built by Olivier de Clisson after 1370. He had acquired the land as part of the dowry on his marriage to Margaret of Rohan. It has been designated as a monument historique since 1928.

The castle remains a residence of Josselin de Rohan.

fourteenth Duke of Rohan, who was President of the region of Brittany from 1998 to 2004. A marble bust of the 13th Duke, Alain Louis Auguste de Rohan-Chabot, sculpted in 1910 by Auguste Rodin, is displayed in the antechamber, and there is also an equestrian statue of Olivier de Clisson.

All content from Kiddle encyclopedia articles (including the article images and facts) can be freely used under Attribution-ShareAlike license, unless stated otherwise. Cite this article:
Josselin Castle Facts for Kids. Kiddle Encyclopedia.