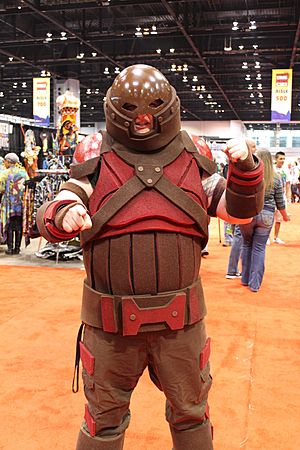 A cosplayer dressed up as the Juggernaut.

The Juggernaut is a Marvel Comics supervillain created by Stan Lee and Jack Kirby in 1965.

He has been played by Vinnie Jones in X-Men: The Last Stand and voiced by Ryan Reynolds in Deadpool 2.

All content from Kiddle encyclopedia articles (including the article images and facts) can be freely used under Attribution-ShareAlike license, unless stated otherwise. Cite this article:
Juggernaut (comics) Facts for Kids. Kiddle Encyclopedia.