Julia Kristeva ( Bulgarian: Юлия Кръстева; born 24 June 1941) is a Bulgarian-French philosopher, literary critic, semiotician, psychoanalyst, feminist, and, most recently, novelist, who has lived in France since the mid-1960s. She is now a professor emeritus at the University Paris Diderot. The author of more than 30 books, including Powers of Horror, Tales of Love, Black Sun: Depression and Melancholia, Proust and the Sense of Time, and the trilogy Female Genius, she has been awarded Commander of the Legion of Honor, Commander of the Order of Merit, the Holberg International Memorial Prize, the Hannah Arendt Prize, and the Vision 97 Foundation Prize, awarded by the Havel Foundation.

Kristeva became influential in international critical analysis, cultural studies and feminism after publishing her first book, Semeiotikè, in 1969. Her sizeable body of work includes books and essays which address intertextuality, the semiotic, and abjection, in the fields of linguistics, literary theory and criticism, psychoanalysis, biography and autobiography, political and cultural analysis, art and art history. She is prominent in structuralist and poststructuralist thought.

Kristeva is also the founder of the Simone de Beauvoir Prize committee.

Born in Sliven, Bulgaria to Christian parents, Kristeva is the daughter of a church accountant. Kristeva and her sister attended a Francophone school run by Dominican nuns. Kristeva became acquainted with the work of Mikhail Bakhtin at this time in Bulgaria. Kristeva went on to study at the University of Sofia, and while a postgraduate there obtained a research fellowship that enabled her to move to France in December 1965, when she was 24. She continued her education at several French universities, studying under Lucien Goldmann and Roland Barthes, among other scholars. On August 2, 1967, Kristeva married the novelist Philippe Sollers, né Philippe Joyaux.

Kristeva taught at Columbia University in the early 1970s, and remains a Visiting Professor. She has also published under the married name Julia Joyaux. 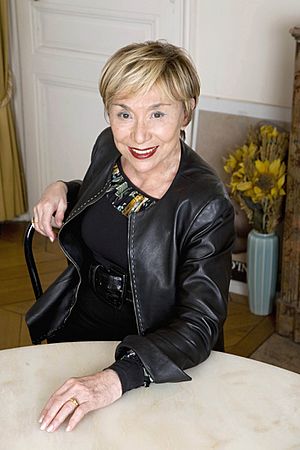 Julia Kristeva in Paris in 2008

All content from Kiddle encyclopedia articles (including the article images and facts) can be freely used under Attribution-ShareAlike license, unless stated otherwise. Cite this article:
Julia Kristeva Facts for Kids. Kiddle Encyclopedia.