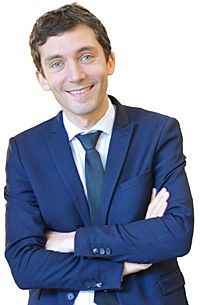 A member of the Front National since 2000, he has been its spokesperson since 2017. He is also mayor of Beaucaire (Gard) and president of the Rassemblement national group at the regional council of Occitanie.

In the 2014 municipal election in Beaucaire, the list he is leading leads the second round in a quadrangular format, with 39.8% of the votes.

All content from Kiddle encyclopedia articles (including the article images and facts) can be freely used under Attribution-ShareAlike license, unless stated otherwise. Cite this article:
Julien Sanchez Facts for Kids. Kiddle Encyclopedia.