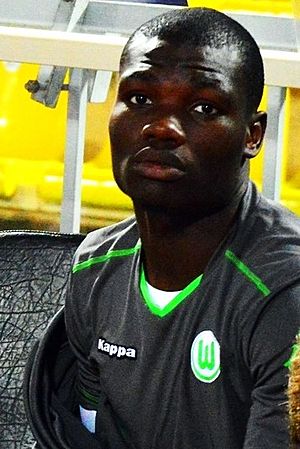 Bernard Malanda-Adje (28 August 1994 – 10 January 2015), nicknamed Junior Malanda, was a Belgian professional footballer. He played as a defensive midfielder for VfL Wolfsburg in the Bundesliga.

He was born in Brussels, Belgium.

Malanda died in a car accident in Porta Westfalica, North Rhine-Westphalia, Germany at the age of 20.

All content from Kiddle encyclopedia articles (including the article images and facts) can be freely used under Attribution-ShareAlike license, unless stated otherwise. Cite this article:
Junior Malanda Facts for Kids. Kiddle Encyclopedia.