Juniperus deppeana (alligator juniper or checkerbark juniper; Native American names include táscate and tláscal) is a small to medium-sized tree reaching 10–15 m (rarely to 25 m) tall. It is native to central and northern Mexico (from Oaxaca northward) and the southwestern United States (Arizona, New Mexico, western Texas). It grows at moderate altitudes of 750–2,700 meters (2,460–8,860 ft) on dry soils. 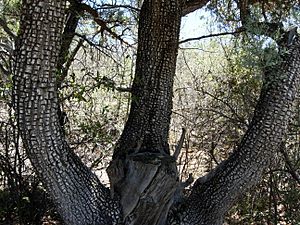 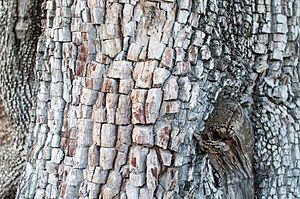 The bark is usually very distinctive, unlike other junipers, hard, dark gray-brown, cracked into small square plates superficially resembling alligator skin; it is however sometimes like other junipers, with stringy vertical fissuring. The shoots are 1-1.5 mm diameter; the leaves are arranged in opposite decussate pairs or whorls of three; the adult leaves are scale-like, 1-2.5 mm long (to 5 mm on lead shoots) and 1-1.5 mm broad. The juvenile leaves (on young seedlings only) are needle-like, 5–10 mm long. The cones are berry-like, 7–15 mm in diameter, green maturing orange-brown with a whitish waxy bloom, and contain 2–6 seeds; they are mature in about 18 months, and are eaten by birds and mammals. The male cones are 4–6 mm long, and shed their pollen in spring. It is largely dioecious, producing cones of only one sex on each tree, but occasional trees are monoecious.

There are five varieties, not accepted as distinct by all authorities:

The berrylike cones are eaten by birds and mammals.

All content from Kiddle encyclopedia articles (including the article images and facts) can be freely used under Attribution-ShareAlike license, unless stated otherwise. Cite this article:
Juniperus deppeana Facts for Kids. Kiddle Encyclopedia.