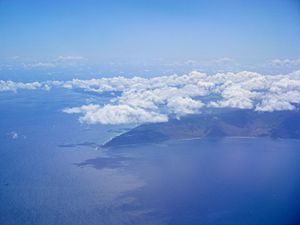 Aerial photo of Kaʻena from the west 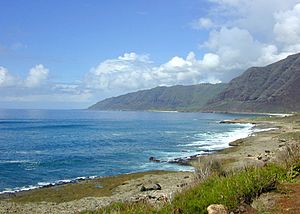 Panorama of the Kaʻena Point Trailhead, as seen from the east side of O'ahu, past Mokule'ia Beach in 2013

Kaʻena or Kaena Point is the westernmost tip of land on the island of Oʻahu. The point can be reached on foot from both the East (via Oʻahu's North Shore / Mokulēʻia) and Southeast (via Waiʻanae Coast). An unimproved track extends some 3 miles (4.8 km) along the coast from the end of the paved road on the east side, where a gate prevents entry of all except authorized vehicles. On the southeast side, at Kaʻena State Park, a paved road passes a beach before terminating into an unpaved road. It continues for a few miles, after which the road is washed out, and further travel must be on foot. It is not possible to travel around the point in a vehicle as the route is better described as a "path" in most places, and is lined on one side with a cliff and on the other with basalt rocks which are quite capable of damaging vehicles.

In Hawaiian, kaʻena means 'the heat'. The area was named after a brother or cousin of Pele who accompanied her from Kahiki. The State of Hawaiʻi has designated the point as a Natural Area Reserve to protect nesting Laysan Albatrosses and wedge-tailed Shearwaters, Hawaiian monk seals, and the fragile (to vehicular traffic) native strand vegetation that has been restored there.

Some ancient Hawaiian folklore states that Kaʻena Point is the "jumping-off" point for souls leaving this world.

Ka'ena Point sustains an ecosystem that is home to many native Hawaiian plants and animals.

Ka'ena Point is a park and hiking site, and is also known for snorkeling. This spot has a white sandy beach that begins from the western tip of Oahu to the Waianae Mountains. Ka'ena Point is one of the best snorkeling places in Oahu; the beach is home to many different fishes, including Hawaii's State Fish, the Humuhumunukunukuapuaa.

During the winter months, Oʻahu's North Shore is typically bombarded by large, powerful waves that attract surfers from around the world. It is rumored that Kaʻena Point typically has waves (up to 15 metres or 49 feet in height) larger than those at Waimea Bay, one of Oʻahu's world-famous surfing locations. This has not been confirmed; however, during the famous "Swell Of The Century" in 1969 and on the day of Greg Noll's famous wave at Mākaha, Greg himself took a picture of a gigantic wave breaking at Kaʻena Point. Until "Biggest Wednesday" on 28 January 1998, when professional surfer Ken Bradshaw was photographed riding a wave with a reported 85-foot (26 m) face, it was believed that Noll's picture showed the largest wave ever photographed. During that famous swell in January 1998, several persons reported seeing waves with 60–80-foot (18–24 m) faces at Kaʻena Point.

In 1899, the Oahu Railway and Land Company constructed a railway that encompassed 70 miles from Honolulu through Kahuku to transport sugarcane. Most of the tracks were destroyed due to a tsunami in 1946. Today, parts of the railroad tracks are still visible along the Ka'ena point trail.

Despite these reports, Kaʻena Point does not have the popularity with surfers of other North Shore locations. Kaʻena Point is located in a remote area with no direct paved road access and no rescue capabilities. Additionally, the point's geography results in undertows, dangerous rip currents and other hazardous ocean conditions that make any water activity highly dangerous.

Ka'ena used to be an active shield volcano that formed about 15% of the island. It is also 5 million years old, making it the oldest volcano on Oahu. Ka'ena must have suffered a large collapse because of its large crater. When it became extinct, which was about 4.2 million years ago, it stood 3,000 feet tall. 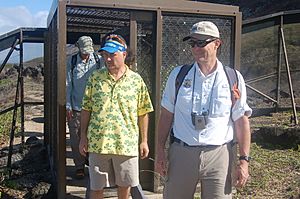 In 2011, the United States' first predator proof fence was constructed at Ka’ena Point, costing about $290,000. The fence is approximately 2,133 foot long, and encompasses 59 acres of land. Some people have criticized the fence for taking away the area's natural beauty, but the total population of Wedge-tailed Shearwater fledglings, Laysan Albatross fledglings, Ohia, Sandalwood trees, and several other species have risen significantly.

All content from Kiddle encyclopedia articles (including the article images and facts) can be freely used under Attribution-ShareAlike license, unless stated otherwise. Cite this article:
Kaena Point Facts for Kids. Kiddle Encyclopedia.