Dikgacoi began his career at local club Cardiff Spurs, before moving to Golden Arrows in 2005 as a little-known holding midfielder from lower league side Bloemfontein Young Tigers. At Arrows, he developed into one of the country's best players in his position and was subsequently rewarded with the captain's armband.

On 4 August 2009, Dikgacoi announced that he had reached an agreement with Fulham after a successful trial at the club. The deal was only finalised on 26 August after a work permit was granted. Dikgacoi had trained with his former club Golden Arrows while the work permit process took place in order to maintain fitness. He made his debut on 4 October, but was sent off in the 41st minute for slapping Scott Parker.

After appearing only once for Fulham under Mark Hughes in the 2010–11 season, Dikgacoi was allowed to drop down a division and join Crystal Palace in February on a loan deal until the end of the season. He scored his first goal for Crystal Palace against Cardiff on 8 March 2011, before moving permanently to the Eagles on 4 July 2011 for a fee of £600,000.

On 12 June 2014, Dikgacoi signed a 3-year deal with Cardiff City after refusing a new deal with Crystal Palace. He made his debut in a 1–0 loss to Wolverhampton Wanderers, coming on for Aron Gunnarsson on 23 August. His full debut came 3 days later in the League Cup, where Cardiff beat Port Vale. Following a series of niggling of injuries, Dikgacoi was ruled out for four months with a knee injury in November.

Dikgacoi did not return until the following season, where he started on the opening day against Fulham. He made 25 appearances during the season as Cardiff missed out on the play-offs, before his contract was terminated by mutual consent on 26 August.

In October 2016, Dikgacoi signed a short-term deal with Lamontville Golden Arrows F.C. after training with the team following his release from Cardiff City. As a result of injuries and weight issues, he played in just 10 matches and failed to complete a match. The Golden Arrows announced in June 2017 that he would not return for the following season.

Dikgacoi made his international debut on 27 May 2007, in a COSAFA Cup match against Mauritius. He scored his first two goals on 7 June 2008, in a 2010 World Cup qualifier against Equatorial Guinea, which ended 4–1. He was part of Bafana Bafana's 2008 African Nations Cup squad and was also a participant at the 2009 FIFA Confederations Cup, 2010 FIFA World Cup and 2013 African Cup of Nations, held in his home country.

Following his release from Golden Arrows, Dikgacoi retired from playing football and entered the business arena alongside his business partner Tieho Benny Mokhalinyane. In 2018, his apparel company International Sports Apparel Design Institute concluded a deal with the Football Association of Malawi for the supply of kits, tracksuits, and golf shirts. 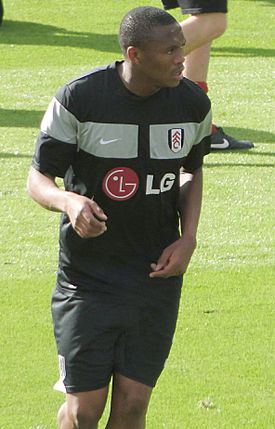 Dikgacoi warming up before his debut game with Fulham in 2009

All content from Kiddle encyclopedia articles (including the article images and facts) can be freely used under Attribution-ShareAlike license, unless stated otherwise. Cite this article:
Kagisho Dikgacoi Facts for Kids. Kiddle Encyclopedia.