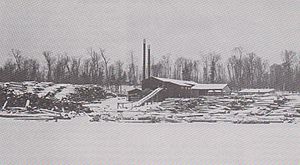 Kaiser is a ghost town in Price County, Wisconsin, United States. Kaiser was located in the town of Lake along the current route of the Tuscobia State Trail, 5 miles (8.0 km) west-southwest of Park Falls. The town was marked on USGS maps as late as 1941.

The village of Kaiser was platted by, and named after Arnold E. Kaiser in 1911. Mr. Kaiser was a logger and civic leader from nearby Park Falls.

Farmland near the area of Kaiser had been settled as early as 1881. John Stehwein homesteaded 160 acres of land along County Road E, an area which became known as "Kaiser's Corner". C.M. Gardner, another early settler, was the namesake of nearby Gardner Lake.

Walter Loomer built a small country store in October 1901. The store, a Post Office, and a one-room school were already open when the plat for the village was laid out.

The sawmill that provided work for many residents was built by J.S. Blackwell in 1905, on a pond located about one-half mile west of the "Kaiser's Corner" spot. Blackwell contracted with J.W. and E.W. Noble to build and operate the mill. Logs were brought in by neighboring farmers and the lumber was then either sold, or shipped out to Park Falls by horse-drawn wagon. Operations expanded considerably when the Omaha Railway Line approached Park Falls and built a siding to the mill in 1910.

Arnold Kaiser, a contract logger, then bought out the Nobles, and ran the mill with Blackwell. He platted his village where the sawmill spur route met the main line of the Omaha Railway, and attempted to sell lots in the village for homes and businesses. He envisioned a prosperous community, named after himself. Although the Kaiser village was the terminus for the Omaha Railway Line for three years before track was extended to Park Falls, only one house was ever built in the platted village. It stood alone in the clearing and was later known as "The Chicken House".

A number of homes, a post office, school, and general store were all built in the vicinity of the sawmill and the "Kaiser's Corner" spot. This was the real Kaiser community, and not the streets and lots that were laid out by Mr. Kaiser. The big plans of Mr. Kaiser, of a large populated community, remained a dream that never materialized.

All content from Kiddle encyclopedia articles (including the article images and facts) can be freely used under Attribution-ShareAlike license, unless stated otherwise. Cite this article:
Kaiser, Wisconsin Facts for Kids. Kiddle Encyclopedia.