The main A816 road from Oban to Lochgilphead passes the bay. To the south west is the small village of Arduaine situated close to the Arduaine Point and Asknish Bay. To the north east is the small settlement of Kilmelford. 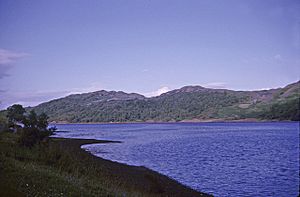 To the east, the bay is bounded by Rubh án Àird Fhada point. To the west is the small tidal sea loch Loch na Cille, which provide a sheltered haven for yachts. On the other side of Loch Melfort from the bay, is the small rocky island of Eilean Coltair to the north west. Further to the west is the larger Kilchoan Bay which contains the island. Directly opposite is the Bàgh na Dalach Dubh-Chlachaich point and east at the head of Loch Melfort is the Fearnach Bay

All content from Kiddle encyclopedia articles (including the article images and facts) can be freely used under Attribution-ShareAlike license, unless stated otherwise. Cite this article:
Kames Bay, Loch Melfort Facts for Kids. Kiddle Encyclopedia.