The Kauaʻi nukupuʻu (Hemignathus hanapepe) is a species of nukupuʻu once found throughout parts of the Hawaiian island of Kauaʻi. It is an insect eater that picks out its tiny prey from tree bark. The males are yellowish with brown wings, while the females are grayish brown with a yellow throat streak. 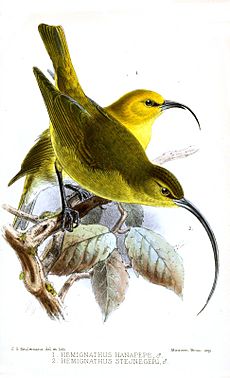 Illustration from The Ibis, the brighter bird in the back

The species was abundant until the 19th century, when the loss of its lowland forests to slash and burn farming methods damaged its habitat. By 1889, this bird was very rare, though it could still be found in small flocks in the higher forests. Sightings took place through the 20th century. It is feared that the damage from Hurricane Iniki in 1992 created more damage to the bird's habitat, and there have been no sightings since 1996.

All content from Kiddle encyclopedia articles (including the article images and facts) can be freely used under Attribution-ShareAlike license, unless stated otherwise. Cite this article:
Kauaʻi nukupuʻu Facts for Kids. Kiddle Encyclopedia.