In 2014, the station was used by an average of 204,153 passengers daily (boarding passengers only), making it the tenth-busiest station operated by JR East.

Kawasaki Station is served by the following JR East lines. 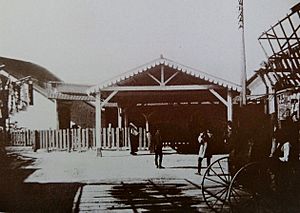 The station entrance in 1901

The station opened on July 10, 1872 (June 5 in original Japanese calendar then in use) as the first intermediate station of the first railway in Japan when it was providing a trial service on the section between Shinagawa Station and Sakuragichō Station in Yokohama before the official inauguration in October 1872. The Nambu Railway, which later became the Nambu Line, opened on March 9, 1927. 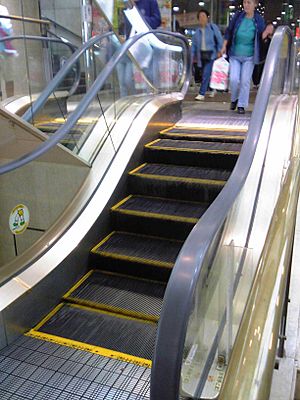 The short escalator beneath the More's department store

Kawasaki City Tram operated a 6.7-kilometre long (4.2 mi) line from its Shiden Kawasaki terminal in front of this station to the now-closed Shiohama Station from 1944 to 1969.

The basement area of the adjoining More's department store is home to what is dubbed "the world's shortest escalator", with a height of just 83.4 cm (2 ft 8.8 in).

All content from Kiddle encyclopedia articles (including the article images and facts) can be freely used under Attribution-ShareAlike license, unless stated otherwise. Cite this article:
Kawasaki Station Facts for Kids. Kiddle Encyclopedia.