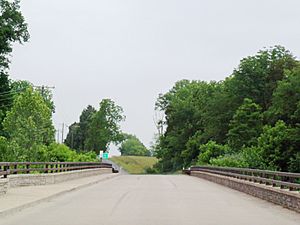 Kelly's Ford was a major crossing point on the Rappahannock River. It was the site of a Civil War battle for control of the river ford. Today it is the only crossing on the river between Fredericksburg and Remington. It is the location of the Inn at Kelly's Ford and the Kelly's Ford Equestrian Center. It is also a frequently used launch point for canoe trips down the mostly untouched river.

All content from Kiddle encyclopedia articles (including the article images and facts) can be freely used under Attribution-ShareAlike license, unless stated otherwise. Cite this article:
Kelly's Ford, Virginia Facts for Kids. Kiddle Encyclopedia.