Born in West Frankfort, Illinois, Gray attended the West Frankfort and Pope County elementary schools and graduated from Frankfort Community High School. At age 13 Gray started a business – Gray's Roller Rink, at which he performed almost every job alone, from floor manager to concession stand cashier to janitor. At age 16, he became an auctioneer, and at age 18 he became the owner of the Gray Motors car dealership, which he operated until 1954. 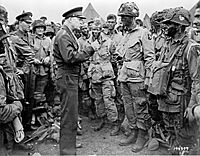 General Eisenhower addresses soldiers preparing for D-Day assault. He is the soldier in visored cap (not helmet) at far left

According to the authors of Pass the Plate, a 2009 biography of Gray, he was at the Greenham Common air base in June, 1944 and was assigned as Dwight D. Eisenhower's driver when Eisenhower met with Company E, 502nd Infantry Regiment shortly before the unit boarded planes and departed for the assault on Normandy.

After the war Gray was active in the American Legion, and was commander of the Southern Illinois region. In addition he served as Vice President of the Illinois Jaycees, and he credited these experiences with giving him the contacts and name recognition to mount a race for Congress.

Gray also completed training as an airplane and helicopter pilot and operated an air service at Benton, Illinois from 1948 to 1952.

In 1953 Gray was one of the founders of the Walking Dog Foundation for the Blind, a charitable organization to provide guide dogs to individuals who are blind or visually impaired.

In retirement, Gray was a resident of West Frankfort, and he opened a museum to showcase his political memorabilia and other mementos and souvenirs. In 1999, he suffered a stroke that left his speech slurred and his right side paralyzed.

The United States court house and post office in Benton, Illinois is the Kenneth Gray Federal Building. In 2008, the post office in West Frankfort was named for him. Also in 2008, Governor Rod Blagojevich designated Interstate 57 between Mile Post 0 at the Illinois State Line and Mile Post 106 at the Marion/Jefferson County Line as the "Ken Gray Expressway."

The Ken Gray Scholarship was created at John A. Logan College (JALC) in 2008. The scholarship is awarded to JALC students from Franklin County who are in their second year and plan to attend Southern Illinois University.

Gray was the subject of a biography, 2009's Pass the Plate: The Legend & Legacy of United States Congressman Kenneth J. Gray, by Maxine Pyle and Marleis Trover.

In 2016 Gray's wife closed the Ken Gray Museum and donated Gray's collection of memorabilia and other items to Morthland College. The college closed in 2018, and as of September 2018 the whereabouts of the collection is unknown. The college's attorney indicated in news accounts that the building the collection was housed in was robbed and an FBI investigation was opened.

All content from Kiddle encyclopedia articles (including the article images and facts) can be freely used under Attribution-ShareAlike license, unless stated otherwise. Cite this article:
Kenneth J. Gray Facts for Kids. Kiddle Encyclopedia.