Kentrosaurus is a genus of stegosaurian dinosaur from the Late Jurassic of Tanzania. The type species is named and described by Germanpalaeontologist Edwin Hennig in 1915.

Fossils have been found only in the Tendaguru Formation, dated to about 152 million years ago. Hundreds of bones were unearthed by German expeditions to German East Africa between 1909 and 1912. Although no complete skeletons are known, the remains provided a nearly complete picture of the build of the animal.

Kentrosaurus was a small stegosaur. It had the typical dinosaurian body bauplan, characterised by a small head, a long neck, short forelimbs and long hind limbs, and a long, horizontal and muscular tail. The animal generally measured around 4.5 metres (15 ft) in length as an adult, and weighed about one tonne (1.1 tons). It walked on all fours with straight hind limbs. It had a small, elongated head with a beak used to bite off plant material that would be digested in a large gut.

It had a, probably double, row of small plates running down its neck and back. These plates gradually merged into spikes on the hip and tail. The longest spikes were on the tail end and were used to actively defend the animal. There also was a long spike on each shoulder. 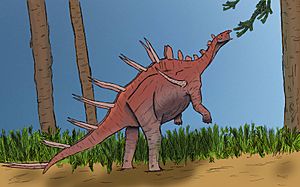 Kentrosaurus reaching for leaves on a tree

All content from Kiddle encyclopedia articles (including the article images and facts) can be freely used under Attribution-ShareAlike license, unless stated otherwise. Cite this article:
Kentrosaurus Facts for Kids. Kiddle Encyclopedia.