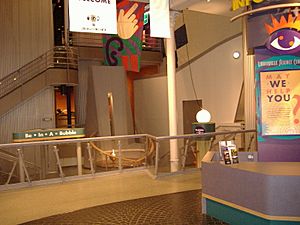 The lobby area; the pendulum has been a fixture of the building for decades

The Kentucky Science Center, previously known as the Louisville Museum of Natural History & Science and then Louisville Science Center, is Kentucky's largest hands-on science museum. Located in Louisville, Kentucky's "Museum Row" in the West Main District of downtown, the museum operates as a non-profit organization. It was founded in 1871 as a natural history collection, and now more than half a million people visit the museum annually. More students in Kentucky take field trips to the Kentucky Science Center than to any other destination.

There are about 550,000 visitors annually. A special hands-on area, featuring six educational activity sections, for children under seven was renovated and renamed KidZone in 1998.

The building itself is located at 727 West Main Street, and takes up 150,000 sq ft (14,000 m2). The distinctive cast-iron facade limestone building was originally built in 1878 as a dry goods warehouse. The city purchased the property in 1975 and the museum moved into the premises in 1977, subsequently winning several design awards for its preservation of this venerable building. A four-story digital theater was added in 1988 and renovated in early 2014. Three million people have seen at least one of the 45 different films shown there.

The lobby area; the pendulum has been a fixture of the building for decades.

On January 11, 2007 it was announced that the Kentucky Science Center would acquire the Alexander Building which was built in 1880 and is adjacent to the current buildings.

All content from Kiddle encyclopedia articles (including the article images and facts) can be freely used under Attribution-ShareAlike license, unless stated otherwise. Cite this article:
Kentucky Science Center Facts for Kids. Kiddle Encyclopedia.