Ketil Bjørnstad (born 25 April 1952 in Oslo, Norway) is a pianist, composer and author. Initially trained as a classical pianist, Bjørnstad discovered jazz at an early age and has embraced the emergence of "European jazz".

He is an artist on the ECM record label, but has also published some twenty books, including novels, poetry, and essay collections.

He has collaborated with other ECM artists, including cellists Svante Henryson and David Darling, drummer Jon Christensen, and guitarist Terje Rypdal. 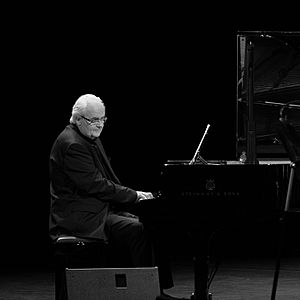 Ketil Bjørnstad was trained as a classical pianist and studied with Amalie Christie and Robert Riefling, and also in London and Paris. He showed great talent at a young age, and won the title of "Youth Piano Master" in 1966 and 1968. When he was 16, he made his debut as a concert pianist with Béla Bartók's third piano concerto.

Bjørnstad subsequently turned towards jazz and rock, in close cooperation with the guitarist Terje Rypdal, bassist Arild Andersen, drummer Jon Christensen and the American cellist David Darling. He has recorded more than 50 albums, for labels which include Universal, Kirkelig Kulturverksted and ECM. He is particularly famous for the work Leve Patagonia (1978), which features Cornelis Vreeswijk and Lill Lindfors. His most famous song is "Sommernatt ved fjorden", sung by Ellen Westberg Andersen. Bjørnstad has released discs with a range of artists including Anneli Drecker, Kristin Asbjørnsen, Kari Bremnes, Lill Lindfors, Randi Stene, Lynni Treekrem, Frøydis Armand, the Stavangerensemblet, Anders Wyller, Per Vollestad and Ole Paus. He is internationally known for his Universal and ECM recordings, including The Sea, duo recordings with David Darling and Terje Rypdal, Grace, with Anneli Drecker, Bendik Hofseth and Trilok Gurtu, Floating with bassist Palle Danielsson and percussionist Marilyn Mazur, which went to the top of the jazz charts in Germany, solo triple album Rainbow Sessions and The Light, with Randi Stene and Lars Anders Land. Gramophone magazine has compared Bjørnstad's songs to those of Leonard Cohen. His ECM-album, Remembrance (2010), adds to his catalogue of his serene, meditative work.

Bjørnstad has worked in recent years with the Swedish cellist Svante Henryson. In 2000 he wrote the millennium oratorio Himmelrand (The edge of the sky), based on texts of the poet Stein Mehren. He wrote commissions for the Molde International Jazz Festival in 2007 and for the Bjørnson Festival in 2008. He also wrote "Coast Lines" for the Canal Street Festival in Arendal in 2007 and "Hvalenes Song" for Vestfold International Festival in 2009. His music has often been used by film directors, including Ken Loach and Jean-Luc Godard. As a pianist he has toured all over the world, and visited jazz festivals including those in Montreal, Shanghai, Taipei, Rome, Nancy, Frankfurt, Leipzig, London, Molde and Kongsberg. 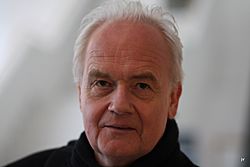 Bjørnstad first appeared as an author in 1972 with the poetry collection Alone. He has published about 30 books in all, including poems, novels and biography. Among his earliest novels are Pavane and Bingo – a virtue of Essentials. His novel Oda!, which is based on the life of Oda Krohg is regarded as a reference work on the bohemian scene in Kristiania (Oslo before 1924), and sits alongside his biography of Hans Jæger. A translation of his biographical work The story of Edvard Munch was published in English to coincide with a Munch retrospective exhibition. Among his other literary works are the critically acclaimed Villa Europa and the Victor-Alveberg trilogy, which consists of the novels Drift, Dream of the Sea and Road to Dhaka . Bjørnstad won the Riksmål prize in 1998 with Spiritual. The same year he wrote a satirical book about football, The journey to Gaul with Ole Paus. Mention must also be made of the millennium trilogy which comprises Fall, Ludvig Hassel's Tusenårsskiftet (Ludwig Hassel's Millennium) and Tesman.

Bjørnstad wrote the psychological thrillers The Custom Themes and Twilight. The events of the latter take place in the archipelago of Tvedestrand, where Bjørnstad lived in the 1970s and 80s. More recently, Bjørnstad wrote an award-winning trilogy about the young pianist Aksel Vinding. It consists of the novels The music, The River and Damen i Dalen (The Lady in the Valley).

Bjørnstad's literary breakthrough in Germany came in 2006 with Vindings Spiel (To the music) published by Suhrkamp / Insel. The influential critic Elke Heidenreich described the novel as "a perfect book" in her Lesen! program for ZDF, and it went straight into the bestseller list of Der Spiegel. The book was also Bjørnstad's literary breakthrough in France, and was awarded the Prix des lecteurs for 2008. To Music was published in English in 2009. In 2010, the novel was longlisted for The Independent Foreign Fiction Prize.

The three novels The Immortals/De Udødelige, End of the World/Verdens Ende and Loneliness/Ensomheten, are comparable to Bjørnstads Millennium-trilogy, where the author discusses the modern mans possibilities in a contemporary setting. In Frankfurter Allgemeine Zeitung, the critic Klaus Birnstiel wrote that The Immortals was "a great novel, not easy to forget".

Master of dreams/Drømmemesteren is a biography about the Norwegian painter Bendik Riis who lived much of his life in different institutions. The Road to Mozart/Veien til Mozart is both a Mozart-biography and a story about the authors childhood in Oslo in the Sixties and Seventies. The book received unison praise by Norwegian critics, and is sold to Suhrkamp/Insel in Germany

On ECM, Bjørnstad has released the albums Life in Leipzig, Remembrance, Night Song, Vindings Music and La Notte. The albums Soloppgang/Sunrise (text by Edvard Munch) and A Passion for John Donne are written for choir and soloists, as well as Sanger om tilhørighet, where Bjørnstad continue his collaboration with the Norwegian singer and saxophone player Håkon Kornstad.

On 3 October 2014. Bjørnstad played for more than 50,000 people, outdoor at the Jarasum International Jazz Festival in Korea, together with Terje Rypdal.

In 2015, Bjørnstad recorded a new album with Ole Paus, called Frolandia. He also launched a new novel, called The Sixties/Sekstitallet, the first of six novels about the decades from the sixties to today. The Seventies/Syttitallet, and then, annually: The Eighties/Åttitallet, The Nineties/Nittitallet, 2000/Tyvetallet and, released in August 2020: The Last Decade/Siste Tiåret. The series has so far sold in total more than 175,000 copies (Aschehoug Forlag). The first books have also been translated into German. In ZDF Matthias Heineman writes that Bjørnstad is "a solid storyteller". In Jyllandsposten Lars-Ole Knippel chose The Nineties/Nittitallet as one of the best book of the year(2018). Verdens Gang writes about The Seventies/Syttitallet (2016):This is truly an adventurous journey. (Guri Hjeltnes)

In recent years, as a musician, Bjørnstad has released a number of solo piano albums, Shimmering and Images from 2015, but also The World I Used To Know (Grappa 2019), recorded in Abbey Road's famous Studio 2 in London. The album was launched at the same time as two sold-out concerts in The Norwegian Opera, which marked Bjørnstad's fiftieth anniversary as a musician. The first concert was also filmed and shown on NRK. Bjørnstad's latest ECM-release is A Suite Of Poems with Anneli Drecker and Lars Saabye Christensen. The same year, Grappa released Hun som kjenner tristheten ved ting with Eva Bjerga Haugen, based on lyrics by Kjersti Annesdatter Skomsvold.

In April 2020, Grappa launched The Personal Gallery with violinist Guro Kleven Hagen. Three months later, Lawo launched Lofotoratoriet with Marianne Beate Kielland, and in March 2021, Simax will release a dress rehearsal-recording and dvd of his new opera Flagstad-an Opera, a live performance from The Norwegian Opera in Oslo, November 2020.

All content from Kiddle encyclopedia articles (including the article images and facts) can be freely used under Attribution-ShareAlike license, unless stated otherwise. Cite this article:
Ketil Bjørnstad Facts for Kids. Kiddle Encyclopedia.