Kevin Michael Cosgrove (January 6, 1955 – September 11, 2001) was an American insurance business executive and victim of the September 11 attacks on the World Trade Center. He served as a vice president at Aon Corporation.

Cosgrove is known for the 9-1-1 call he made during his final moments, which ended with him screaming from inside the South Tower as it collapsed. The recording was used during the prosecution of Zacarias Moussaoui, the only criminal trial to result from the attacks. Cosgrove's last words made international headlines.

Cosgrove and his family lived in West Islip, New York.

Cosgrove was a vice president of claims for Aon Corporation and a fire warden for the company. According to the 9-1-1 recording played during the trial of Zacarias Moussaoui, Cosgrove was located in the northwest corner of the 105th floor in the South Tower, overlooking the World Financial Center when he called 9-1-1 at 9:54 am. 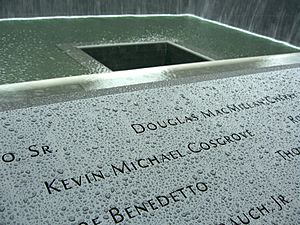 Cosgrove told 9-1-1 dispatchers he was calling from Jonathan Ostaru's office and had two other individuals with him.

Cosgrove's remains were found in the rubble. He was buried on September 22, 2001, at St. Patrick Catholic Cemetery in Huntington, New York. He was 46 years old. He was survived by his wife, Wendy Cosgrove, a schoolteacher, and his three children.

At the National 9/11 Memorial, Cosgrove is memorialized at the South Pool on Panel S-60.

All content from Kiddle encyclopedia articles (including the article images and facts) can be freely used under Attribution-ShareAlike license, unless stated otherwise. Cite this article:
Kevin Cosgrove Facts for Kids. Kiddle Encyclopedia.