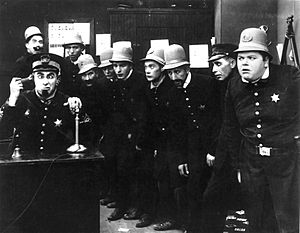 The Keystone Cops in In the Clutches of the Gang 1914

The Keystone Kops were fictional policemen. They were clumsy and not very well organized. They were in silent comedy movies in the 1910s. The movies were produced by Mack Sennett between 1912 and 1917. Their first movie was Hoffmeyer's Legacy in 1912. They became popular from the 1913 short movie The Bangville Police. 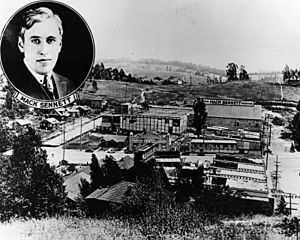 According to Dave Filoni, supervising director of the animated television series Star Wars: The Clone Wars, the look of the police 'droid is based on the appearance of the Keystone Kops. In 2017-18 the Keystone Cops were featured characters in the Macy's Thanksgiving Day Parade.

All content from Kiddle encyclopedia articles (including the article images and facts) can be freely used under Attribution-ShareAlike license, unless stated otherwise. Cite this article:
Keystone Kops Facts for Kids. Kiddle Encyclopedia.