Khartoum Place is a pedestrianised city square in the Auckland CBD, New Zealand. The square, protected by several mature trees, is located between Lorne Street and Kitchener Street, and provides a stairway connection between the two street levels.

In 1993, the centenary of women's suffrage in New Zealand, a painted 2000-tile memorial and waterfall dedicated to Auckland's and New Zealand women's suffrage movement was installed in the stairway. The suffragists depicted in the memorial are (from left) Amey Daldy, Anne Ward, Lizzie Frost, Matilda Allsopp, Elisabeth Yates, Annie Jane Schnackenberg, Fanny Brown, and Ida Wells. 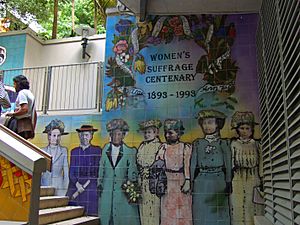 Closeup of the suffrage memorial mural.

In 2006/2007, $2.2 million were spent on upgrading the lower part of the square, with Council intending to spend another $1 million in 2011 to complete the upgrade on the upper level. 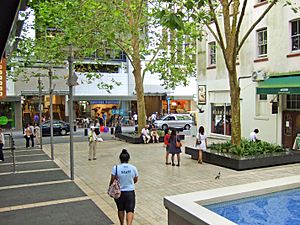 The Auckland Art Gallery is located at the Kitchener Street end of the square, with other related exhibition and public space also arrayed around the square. In 2010 supporters of the Art Gallery campaigned to have the Women's Suffrage Memorial removed, arguing that it blocked the view from Lorne Street to the upgraded Art Gallery entrance. In 2006, there had already been an attempt to remove the memorial from the site. Brian Rudman, in an editorial in The New Zealand Herald spoke out against the removal, lambasting the proposed "processional stairway":

"They see the wide stairway as a giant vacuum cleaner, sucking up pedestrians as they wander along Lorne St and dumping them into the new palace of fine arts."

He also noted that - contrary to the 2006 attempt to have the Women's Suffrage Memorial removed, when the opponents (also connected to the Art Gallery) argued that it had no artistic merit (and were opposed by a public outcry) - in 2010 they argued from an urban design perspective, and were citing such "precedents" as Haussmann's leveling of parts of Paris for its grand new avenues.

In 2011 the Auckland City Council voted to protect the Women's Suffrage Memorial in Khartoum Place in perpetuity.

All content from Kiddle encyclopedia articles (including the article images and facts) can be freely used under Attribution-ShareAlike license, unless stated otherwise. Cite this article:
Khartoum Place Facts for Kids. Kiddle Encyclopedia.