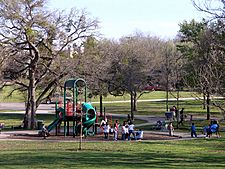 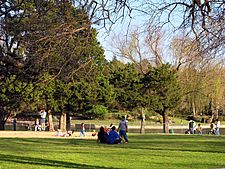 Another view of the park, showing the park's lake

Kidd Springs is a neighborhood in the North Oak Cliff area of Dallas, Texas (USA). James Kidd purchased land in the area in the 1870s which included the spring now bearing his name.

It is also home to a park/recreation area of the same name. The park had its beginnings as a private park in 1895 when the Kidd Springs Fishing & Boating Club began construction of the small spring fed lake. The park became part of the Dallas Parks and Recreation system in 1947.

All content from Kiddle encyclopedia articles (including the article images and facts) can be freely used under Attribution-ShareAlike license, unless stated otherwise. Cite this article:
Kidd Springs, Dallas Facts for Kids. Kiddle Encyclopedia.