The Bishop Arts District is a small shopping and entertainment district in north Oak Cliff, Dallas, Texas (USA), near the intersection of Bishop Street and Davis Street. Bishop Arts is immediately southwest of Downtown Dallas.

The area was originally developed as warehouses and shops in the 1920s. In the 1930s, a trolley stop along Davis became Dallas' busiest trolley stop. The district began a decline in the mid-60's through the beginning of the 80's. The reasons for the decline included the rise of the shopping mall, the loss of sizable tenants such as Astor theater and Goodier Cosmetics, neighborhood demographic changes and finally the fact that buses began to replace streetcars making trolley stops like Bishop and Seventh useless.

In the fall of 1984, Jim Lake saw a bargain in the now run down storefronts and began buying up property. He said, "Hopefully we'll make money on this in the future, but in the first three to five years I'm gonna feed it." Lake said of his decision to buy the property, "I just thought it needed saving." As a sign of his commitment, Lake provided, rent-free for a year, space for a police storefront. This was an important element in the area's security and sense of community. Continuing through the 1990s and 2000s, renovations have taken place to transform the two city blocks into a walkable, urban environment, although the surrounding area has yet to undergo revitalization. Murals, brick pavers, and other street elements have polished the rough look of the warehouses and have made the area a popular leisure and dining destination. 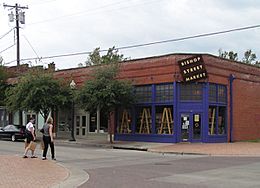 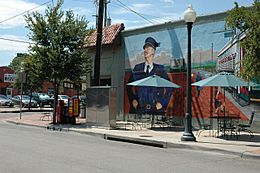 The district can be reached via several Dallas Area Rapid Transit bus routes and from downtown on the Dallas Streetcar.

All content from Kiddle encyclopedia articles (including the article images and facts) can be freely used under Attribution-ShareAlike license, unless stated otherwise. Cite this article:
Bishop Arts District, Dallas Facts for Kids. Kiddle Encyclopedia.