Kids Encyclopedia Facts
This page is about the neighborhood. For the historic home, see Oakcliff.

Oak Cliff is a borough of Dallas, Texas, United States that was formerly a separate town located in Dallas County; Dallas annexed Oak Cliff in 1903. It has since retained a distinct neighborhood identity as one of Dallas' older established neighborhoods. As the city grew larger, it had more recognition.

Oak Cliff has turn-of-the-twentieth-century and mid-20th century housing, many parks, and proximity to the central business district of downtown Dallas.

The boundaries of Oak Cliff are roughly Interstate 30 on the north, Loop 12 & Spur 408 on the west, Interstate 45 on the east, and Interstate 20 on the south. 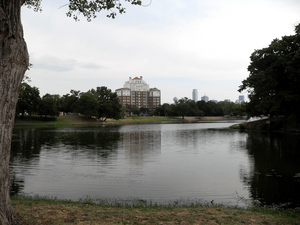 Oak Cliff originated on December 15, 1886, when John S. Armstrong and Thomas L. Marsalis bought a farm of 320 acres (1.3 km2) on the west side of the Trinity River for $8,000. blocks, and the plat of the new town made. Armstrong and Marsalis began to develop the land into an elite residential area, which proved to be a success by the end of 1887, with sales surpassing $60,000. However, after a disagreement between the partners, Marsalis secured complete control over Oak Cliff's development. Armstrong would go on to create his own elite residential development on the north side of Dallas, known as Highland Park.

According to the first plat filed, the original township of Oak Cliff extended as far north as First Street, later named Colorado Boulevard just north of Lake Cliff, then known as Spring Lake, and as far south as a pavilion below Thirteenth Street. It was bounded on the east by Miller Street, later named Cliff Street, and on the west by Beckley Avenue. Jefferson Boulevard was the route of a steam railroad, then called Grand Street.

On November 1, 1887, $23,000 worth of lots were sold in the newly opened Marsalis Addition (Oak Cliff) before noon, and on the following day, ninety-one lots were sold for $38,113. park that included a two-mile (3 km)-long lake and a 2,000-seat pavilion in which dances and operas were held. Another was the Park Hotel, modeled after the Hotel del Coronado in San Diego, which included several mineral baths fed by artesian wells. 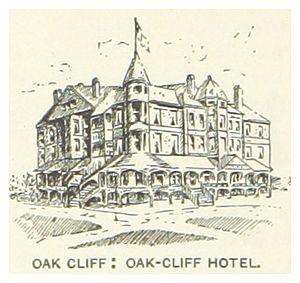 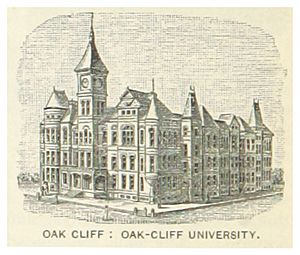 Oak Cliff incorporated in 1890 with a population of 2,470, and secured a post office which operated until 1896. The community had four grocery stores, two meat markets, a hardware store, and a feed store. Businesses included the Texas Paper Mills Company (later Fleming and Sons), the Oak Cliff Planing Mill, the Oak Cliff Artesian Well Company, Patton's Medicinal Laboratories, and the Oak Cliff Ice and Refrigeration Company. A number of new elite residential areas developed by the Dallas Land and Loan Company had pushed the community's boundaries westward to Willomet Street. Oak Cliff's first mayor was Hugh Ewing. In 1891 the community's first newspaper, the Oak Cliff Sunday Weekly, was published by F. N. Oliver.

Over the next three years Oak Cliff's development continued, but, during the depression of 1893, the demand for vacation resorts decreased, and the community's growth stagnated, forcing Marsalis into bankruptcy. Consequently, the Park Hotel was converted into the Oak Cliff College for Young Ladies. Another educational institution, the Patton Seminary, was established two years later by Dr. Edward G. Patton. By 1900 Oak Cliff was already no longer an elite residential and vacation community. Many of the lots once owned by the Dallas Land and Loan Company were subdivided by the Dallas and Oak Cliff Real Estate Company and sold to the middle and working classes, a trend which lasted well into the early 1900s. The census of 1900 reported Oak Cliff's population as 3,640.

Oak Cliff was annexed by Dallas in 1903, after numerous attempts beginning in 1900. The proposal had met with little success, until the community's depressed economy produced a vote in favor of annexation by eighteen votes.

On November 22, 1963, shortly after the fatal shooting of U.S. President John F. Kennedy and the wounding of Texas Governor John Connally (who was a jump-seat passenger in the Kennedy limousine) at 12:30 p.m., as well as the fatal shooting of Officer J. D. Tippit at approximately 1:16 p.m., Oswald entered the Texas Theatre, located in West Jefferson Boulevard in Oak Cliff, shortly after 1:30 p.m. without paying for a ticket, ostensibly to avoid police. The police were later informed by the assistant manager that a man had entered the theater without paying.

The films being presented on that day were Cry of Battle and War Is Hell. Oswald briefly viewed the latter. Open daily, the theater today hosts a mix of repertory cinema and special events.

In the early 1970s, many Oak Cliff schools, along with those in South Dallas, became the focus of a long-running and bitter court battle over desegregation, famously overseen by Federal Judge Barefoot Sanders. As a result, DISD's schools were not officially declared desegregated until 2003.

In April 1908, the Trinity River flooded its banks, rising to a height of 37.8 feet (11.5 m) by April 21. A temporary recession occurred, but rains continued into May, finally raising the river's height to 51.3 feet (15.6 m). The only bridge remaining that connected Oak Cliff with Dallas after the flood was the Zang Boulevard Turnpike, an earthen fill with a single steel span across the river channel, slightly to the north of the present Houston Street Viaduct. About this time, George B. Dealey, publisher of the Morning News, returned from a trip to Kansas City with the idea of securing for Dallas an intracity causeway similar to the one there. From his proposal sprang the Houston Street Viaduct (originally named the Oak Cliff Viaduct), begun October 24, 1910, and opened to traffic February 22, 1912, acclaimed as the longest concrete bridge in the world. This latter designation was later disputed as a publicity stunt.

In 1909, a disastrous fire occurred in Oak Cliff, consuming fourteen blocks of residences, including the Briggs Sanitorium.

On April 2, 1957, a tornado ripped through Oak Cliff as part of the Early-April 1957 tornado outbreak sequence, killing 10 people and causing more than $1 million in damages.

Oak Cliff is the home of the Texas Theatre, where former resident Lee Harvey Oswald, the man suspected of killing U.S. President John F. Kennedy, was arrested. The theater has appeared in many books and movies on the Kennedy assassination including Oliver Stone's 1991 film, JFK.

Oak Cliff is the setting of City Limit, the novel by Lantzee Miller is a coming-of-age story and metaphorical portrait of the beginning of Oak Cliff's recent rebirth and self redefinition.

Legendary Dallas radio station KLIF (the call letters survive today on different frequencies on both AM and FM) was named after Oak Cliff, the community the station was originally licensed to cover when it was founded in 1947.

In addition, the Oak Cliff area encompasses Cockrell Hill, a separate municipality which is an enclave of Dallas.

DART is planning extensions of both the Red and Blue Lines as part of the 2030 Plan, the latter of which will serve the new University of North Texas at Dallas campus.

The Dallas Streetcar is a 1.6-mile (2.6 km) modern-streetcar line connecting Oak Cliff with downtown Dallas. It opened in April 2015, and extensions are planned.

In 2001 Jim Schutze of the Dallas Observer referred to northern Oak Cliff as "Dallas' own Jerusalem, where various ethnicities choose to live close to each other and not get along."

Oak Cliff is considered to be part of the humid subtropical region.

All content from Kiddle encyclopedia articles (including the article images and facts) can be freely used under Attribution-ShareAlike license, unless stated otherwise. Cite this article:
Oak Cliff Facts for Kids. Kiddle Encyclopedia.