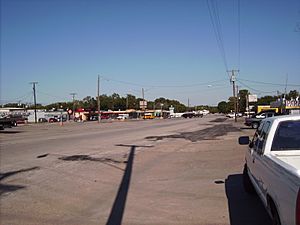 Cockrell Hill is a city in Dallas County, Texas, United States. The population was 4,193 at the 2010 census. It is completely surrounded by the city of Dallas.

Cockrell Hill was established by the pioneer Brentwood Allen Cockrell and his son, Woodrow. They established the town as a way of making a living, and ran it like a business, a tradition which continues today, and is evident in the style of governance in the immediate region. The Cockrell place was known to travelers on the stage line that ran from Dallas to Fort Belknap and on to El Paso and the west. The settlement developed as an agricultural crossroads and by the late 1800s had a few scattered homes, a small store, and a school. Water became the overriding issue for the town's continued growth. Frank Jester, a local developer, laid out the plan for the modern community of Cockrell Hill in 1911. A first attempt at incorporation in 1925 proved unsuccessful, and the following year a vote to disincorporate was approved. The second incorporation passed on July 21, 1937, when the population was 459. The town grew to a population of 1,246 in 1941. Many of the new residents worked in war-related industries located in the surrounding areas. In 1952 the population was 2,194, in 1990 it was 3,916, and in 2000 it was 4,445.In May 2006, Councilman Luis D. Carrera defeated C. P. Slayton and John Mendiola defeated Richard Hall and joined Silvia Ulloa, Richard Perez and Sammy Rodriquez to become the first all-Hispanic City Council in North Texas. 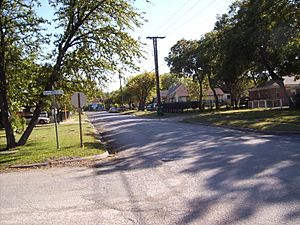 A residential area in Cockrell Hill (corner of Penrod Ave. and Ogden Ave.)

There were 1,150 households out of which 54.2% had children under the age of 18 living with them, 59.4% were married couples living together, 15.8% had a female householder with no husband present, and 16.6% were non-families. 12.7% of all households were made up of individuals and 5.4% had someone living alone who was 65 years of age or older. The average household size was 3.86 and the average family size was 4.18. 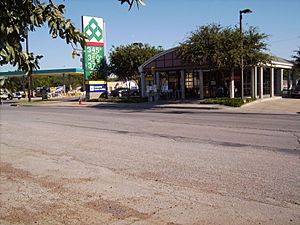 Cockrell Hill can be reached by several bus lines in the Dallas Area Rapid Transit system. The main bus stop is the Cockrell Hill Transfer Location.

All content from Kiddle encyclopedia articles (including the article images and facts) can be freely used under Attribution-ShareAlike license, unless stated otherwise. Cite this article:
Cockrell Hill, Texas Facts for Kids. Kiddle Encyclopedia.