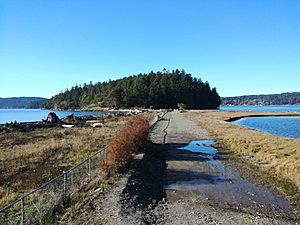 Kiket Island seen from the Fidalgo Island side across the tombolo, while the two islands are connected

Kiket Island is a small islet in Washington, co-owned by the Washington State Parks and Recreation Commission and the Swinomish Indian Tribal Community. Located at Snee Oosh, less than four miles northwest of the town of LaConner in Skagit County, Washington, Kiket is connected to Fidalgo Island by a tombolo, over which runs an access road. Thus, Kiket Island is not what most people would consider an island.

Hope Island lies to the south of Kiket; Skagit Island only a few hundred feet to the southwest. These islands can be said to divide Skagit Bay from Similk Bay. The shoreline of Kiket Island and vicinity has been called one of the best-studied areas of coastal Washington. Ecological studies were made in the last decades of the twentieth century, when the site was considered for a nuclear power plant.

On June 23, 2010, a joint ownership agreement was signed by the state Parks and Recreation Commission and the Swinomish Indian Tribal Community. Both Kiket and tiny Flagstaff Island (connected to Kiket by another tombolo) are included in the agreement, and are now part of Deception Pass State Park. The partners and the Trust for Public Land gathered grants and donations from a range of sources to purchase the $14 million property from a private owner.

The park is now open to the public and restrooms have been constructed at the parking lot accessed via Snee-Oosh Road and on the west end of the island.

As part of the acquisition process, wildlife surveys were conducted in the winter of 2008–2009.

All content from Kiddle encyclopedia articles (including the article images and facts) can be freely used under Attribution-ShareAlike license, unless stated otherwise. Cite this article:
Kiket Island Facts for Kids. Kiddle Encyclopedia.