Kilpisjärvi is a village in the municipality of Enontekiö, Lapland, Finland. It is located in Finland's northern "arm" near the very north westernmost point of Finland.

Although Kilpisjärvi is one of the largest villages in Enontekiö, it is still quite small. In 2000 its population was recorded as 114. Like most Sami villages, Kilpisjärvi is built mainly around one major road.

Kilpisjärvi has its own school and a hotel, and the northernmost research station of the University of Helsinki is situated there, as well as the KAIRA research facility. 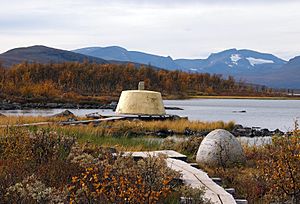 About 10 km west of Kilpisjärvi is Treriksröset, where the "three-country border point" is. This point is where the borders of Finland, Norway and Sweden meet. A monument was built at the exact point in 1926. It replaced an earlier marker built of stone in 1897.

The building of the Kilpisjärvi school burned down on 3 May 2015. It had been occupied by travellers at the time. The fire started from a recreational vehicle parked next to the building. The fire destroyed thousands of euros worth of euro banknotes that had been stored at the school.

All content from Kiddle encyclopedia articles (including the article images and facts) can be freely used under Attribution-ShareAlike license, unless stated otherwise. Cite this article:
Kilpisjärvi Facts for Kids. Kiddle Encyclopedia.