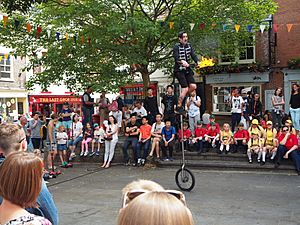 King's Square is an open area in the city centre of York, in England.

In the Roman period, the south-eastern gate of Eboracum lay on the site of what is now King's Square. This was built in about 108, as recorded on a surviving inscription, now in the Yorkshire Museum. The area was mentioned by Egil Skallagrimsson in the 10th-century as "Konungsgarthr", and this has led to a belief that this was the location of the royal palace of the Danelaw, and possibly of its predecessors, the Kingdom of Northumbria and the Kingdom of Deira. By 1430, the west side of the square was occupied by a row of mercer's shops, with a building named "Hellekeld" to their south. In 1627, Duke Gill Hall lay on the north-east side of the square, on its corner with St Andrewgate, and it was recorded that the hall was formerly known as "the King's Court".

Until the 18th-century, the square covered only a small area, and was often regarded as the southernmost part of Low Petergate, immediately north of the churchyard of Holy Trinity, King's Court. The churchyard was reduced on several occasions, and from 1780 the area became known as "King's Square". In 1937, the church itself was demolished, and the square reached its current extent. 19 of the remaining gravestones were used to pave part of the square, although many are now illegible. The square absorbed the northern part of Colliergate and the whole of the street of King's Court, although those street names are retained by the properties on the extended section of the square. Some Mediaeval buildings on King's Court were demolished as late as the 1950s. 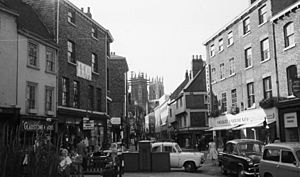 Looking north from King's Square, in the 1960s

In 2013, the City of York Council spent £490,000 renovating the square. It is popular with tourists, who are often entertained by buskers and street performers. Nikolaus Pevsner notes that "the square has trees, which distinguishes it". The York's Chocolate Story attraction lies on the western side of the square.

On the south-west side, number 5 King's Square was built in 1587 by Richard Hutton, while 4 King's Court is 15th-century, but was rebuilt in 1963. Pump Court is also Mediaeval in origin, but was largely rebuilt in 1755, and again in and 1951. In between is Refuge House, built in 1963. On the south-east side is St Trinity House, which was originally three houses hidden behind the church, dating from the 15th-century or earlier. On the north-east side, 2 King's Court is an early-19th century shop.

All content from Kiddle encyclopedia articles (including the article images and facts) can be freely used under Attribution-ShareAlike license, unless stated otherwise. Cite this article:
King's Square (York) Facts for Kids. Kiddle Encyclopedia.