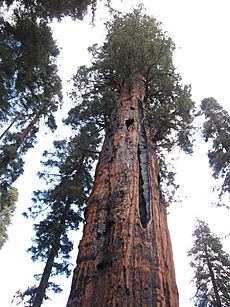 King Arthur, formerly known as the California Tree, is a giant sequoia located in Garfield Grove, the grove is near the town of Three Rivers in California. Its base of up to about 50 feet (15 m) rivals the General Sherman, the largest giant sequoia, for total mass.

The tree was once known as the California Tree, as shown in National Park Service promotional literature from 1917. The King Arthur is the ninth largest giant sequoia in the world.

All content from Kiddle encyclopedia articles (including the article images and facts) can be freely used under Attribution-ShareAlike license, unless stated otherwise. Cite this article:
King Arthur (tree) Facts for Kids. Kiddle Encyclopedia.