The King Fahd Causeway is a series of bridges and causeways connecting Saudi Arabia and Bahrain. The idea of constructing the causeway was based on improving the links and bonds between Saudi Arabia and Bahrain. Surveying of the maritime began in 1968, and construction began in 1981 and continued until 1986, when it was officially opened to the public. In 2008 there was an average of 48,600 passengers per day. 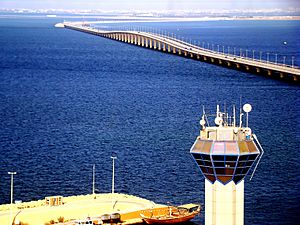 The Border Station has a total area of 660,000 square meters, is the biggest of all embankments. This artificial island is known as Passport Island or Middle Island. The buildings of King Fahd Causeway Authority and other government Directorates were erected on the Border Station, as well as two mosques, two Coast Guard towers and two 65-metre-high (213 ft) tower restaurants. The border station also has extensive landscaping all around the islands in addition to the services and road stations.

One-stop crossing was introduced on the King Fahad Causeway from 6 March 2017. Under the new system, commuters will only have to stop at one post for passport control, car clearance and customs. The measure will ease travel for commuters and is also expected to ease traffic congestion on the highway as the previous system required multiple stops at Saudi and Bahraini check posts. 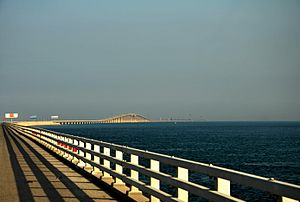 In July 2010, Saudi newspapers quoted King Fahd Causeway Authority chief as saying that the King Fahd Causeway was to undergo a major expansion projected to cost $5.3 million. It was announced that the number of departure lanes would be increased from 10 to 17 and the number of arrival lanes from 13 to 18 on both sides. The renovation includes construction of a commercial center on the Bahraini side.

It will have a number of restaurants, coffee shops, a grocery shop, telephone stalls and a shop to meet travelers needs. Included will be climate controlled washrooms and meeting places so as the average traveler can be better facilitated.

A Bahraini health center was also being built to serve travelers and causeway staff. It will feature an emergency room and ambulance to serve whoever is using the causeway — travelers or employees, a Saudi health center was also planned. A security checkpoint near the Bahraini entrance of the causeway was to be added to the checkpoint near the Saudi entrance.

The project also included expanded public utilities such as washrooms and mosques on both sides of the causeway. A separate project, to revamp the two tower restaurants, one Saudi and one Bahraini, was announced. The renovation would not alter the towers' historic appearance.

All content from Kiddle encyclopedia articles (including the article images and facts) can be freely used under Attribution-ShareAlike license, unless stated otherwise. Cite this article:
King Fahd Causeway Facts for Kids. Kiddle Encyclopedia.