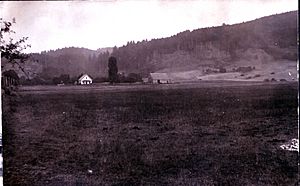 Kings Valley is an unincorporated community and census-designated place in Benton County, Oregon, United States. It is located on the Luckiamute River and Oregon Route 223, the Kings Valley Highway. As of the 2010 census it had a population of 65.

Kings Valley was named after its first settler, Nahum King, who took out a land claim there in 1846. A flour mill was built in the community in 1853. Kings Valley post office ran from 1855 to 1974.

Fort Hoskins Historic Park is nearby, in the former community of Hoskins.

The Valley and Siletz Railroad formerly ran through Kings Valley.

The Kings Valley Store is currently the only brick and mortar business open in Kings Valley.

Kings Valley had a tavern which burnt down in the 1980s, due to suspected arson, though the case was never solved.

All content from Kiddle encyclopedia articles (including the article images and facts) can be freely used under Attribution-ShareAlike license, unless stated otherwise. Cite this article:
Kings Valley, Oregon Facts for Kids. Kiddle Encyclopedia.