Kīpahulu is an unincorporated community in the Hāna district of Maui, Hawaiʻi. It is a sustainable farm community located in a remote area in the southeast part of Maui.

Kīpahulu is unincorporated and is located in the southeastern part of Maui, south of Hāna and east of Kaupō. The only land access to the area is from the north by Hana Highway driving about 45 minutes past Hāna or from west by highway 31 (Piʻilani Highway) which was reopened after it was closed for a period of time due to earthquake damage. Piʻilani Highway is the only major road in Kīpahulu and all populated areas are located along this road.

Kīpahulu currently does not have any electric or water utilities. The only public utility is the telephone. Water is obtained from the streams coming down from Haleakalā and these services are provided to the community by Kaupo Ranch, Ltd. 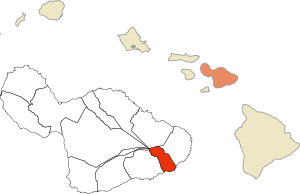 The ancient district of Kipahulu.

The first written description of Kīpahulu was made by La Pérouse in 1786 while sailing along the southeast coast of Maui in search of a place to drop anchor:

I coasted along its shore at a distance of a league (three miles) …. We beheld water falling in cascades …. The inhabitants, which are so numerous that a space of 3–4 leagues may be taken for a single village. The huts are on the coast so that the habitable part of the island is less than one half of a league. After passing Kaupō no more waterfalls are seen, and villages are fewer.

Kīpahulu lowlands were once heavily populated. The area held hundreds of farm sites and agricultural terraces that could support hundreds of people. It was formerly the center of one of the old land districts (moku). In nearby coastal area surveys, over 700 archeological features have been found in the 2,008 acres (8.1 km2) surveyed thus far. The features consist of stone mounds and walls and earthen terraces.

With the development of the whaling industry on the island in 1880s Kīpahulu population started to decline as people moved to main whaling ports like Lāhainā.

In the early 1900s, one of the regular ports of call for the Inter-Island Steam Navigation Company was Kīpahulu. Steamships provided passenger service around Maui and between the islands. Kīpahulu Landing also provided a way for growers and ranchers to ship their goods to markets. Today the land where Kīpahulu Landing existed is private but protected by The Nature Conservancy.

Haleakalā National Park was established as a separate unit of the National Park System in 1960 (it was previously joined with Hawaiʻi National Park on Hawaiʻi Island). At the time, the park only consisted of the crater area of Haleakalā. On March 26, 1951, Kīpahulu Valley was added to Haleakalā National Park (HNP) as the Kīpahulu Biological Reserve to insure protection of endangered ecosystems within the sanctuary. Eighteen years later on January 10, 1969, the HNP boundaries were expanded to include the Kīpahulu coastal area of ʻOheʻo. Although access in the Kīpahulu Biological Reserve is strictly limited to researchers and managers, the ʻOheʻo region of the park is open for recreation. Attractions include the ʻOheʻo Pools, often called the "Seven Sacred Pools" (a name created by tourism proponents), a car-accessible campground, and several maintained trails, such as the four-mile Pipiwai Loop Trail to Waimoku waterfall. The Kīpahulu ʻOhana, a non-profit community organization established in 1995 through a co-operative agreement with Haleakalā National Park to revive, restore, and share the practices of traditional Native Hawaiian culture, also conducts community-based cultural tours in the area.

All content from Kiddle encyclopedia articles (including the article images and facts) can be freely used under Attribution-ShareAlike license, unless stated otherwise. Cite this article:
Kipahulu, Hawaii Facts for Kids. Kiddle Encyclopedia.