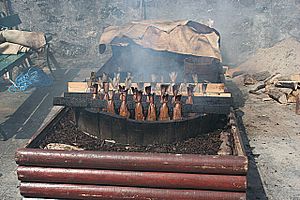 Smoked fish are fish that have been cured by smoking.

Foods have been smoked by humans throughout history. At first this was done as a preservative. Now the smoking of fish is generally done for the unique taste and flavour that comes from the smoking process.

The most common types of smoked fish in the US are salmon, mackerel, whitefish and trout. A common name for cold-smoked salmon is lox.

In the Netherlands, commonly available varieties include both hot- and cold-smoked mackerel, herring and Baltic sprats. Hot-smoked eel is a specialty in the Northern provinces.

Smoked fish is an important item in Russian cuisine, Jewish cuisine, and Scandinavian cuisine, as well as several Eastern and Central European cuisines.

English, Scottish and Canadian cuisine have a strongly brined, smoked herring that used to be known as "red herring". Now it is called kippers.

All content from Kiddle encyclopedia articles (including the article images and facts) can be freely used under Attribution-ShareAlike license, unless stated otherwise. Cite this article:
Smoked fish Facts for Kids. Kiddle Encyclopedia.