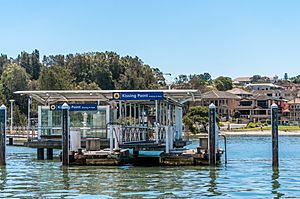 Kissing Point is a point on the Parramatta River about 2 km south of Ryde, located in the suburb of Putney. Historically, the name referred to a much wider area than the current-day point; and perhaps originally to the point near Ryde Bridge where Settlers Park is now located, and where a 1948 brass plaque by the Council states "THIS IS THE SITE OF THE FIRST SETTLEMENT ON 10th JANUARY 1792 - BY - WILLIAM CARELESS and JAMES WEAVERS IN THE LOCALITY SET UP BY GOVERNOR PHILLIP AS FARMS OF THE EASTERN BOUNDARY (LATER CALLED KISSING POINT)".

Several possibilities have been suggested for the origin of the name "Kissing Point". One is that the name was given because the area of water around it was the furthest up Parramatta River that heavily laden vessels could reach before their keels "kissed" the bottom. Another, more romantic possibility is the area was popular for picnics and that Governor Hunter may have had a kiss in return for his chivalry on one such occasion. A third is that Governor Hunter rowed up the river on a journey of exploration, had breakfast at Breakfast Point, rowed across the river to Kissing Point where he kissed his wife goodbye before embarking on his journey.

The area was inhabited by the Wallumedegal people prior to European Settlement.

When the area was first settled by European colonists it was known as Eastern Farms. Land grants were made to 10 emancipated convicts in 1792. By 1794 the name had given way to Kissing Point. In the early 19th century the name was applied to an area including the current day Ryde, Putney and Gladesville.

One of the emancipists was James Squire who brewed the colony's first beer and became a wealthy business man. He grew hops in the area and established a brewery and a tavern on the location just west of the current-day Kissing Point. A plaque to James Squire is erected on the site.

Kissing Point was also an important source of fruits and vegetables for the early colony.

Bennelong died in the area. He was buried on the property of James Squire, probably in the area of the current day Cleves Park, around 300 metres from the point.

Kidman and Mayoh’s Shipyard established to build freight ships to replace freight fleet post World War I. A disastrous outcome, as the two ships built here were not commissioned, and were burnt and sold for salvage. Halvorsen’s ships located where James Squire’s original wharf stood. Halvorsen’s made ships for World War II.

Kissing Point is in the Parish of Hunters Hill in the County of Cumberland. and is in the suburb of Putney.

There is a boat launching ramp adjacent to the Kissing Point Wharf with associated trailer parking. The point is a landmark on the Parramatta Valley Cycleway.

All content from Kiddle encyclopedia articles (including the article images and facts) can be freely used under Attribution-ShareAlike license, unless stated otherwise. Cite this article:
Kissing Point, New South Wales Facts for Kids. Kiddle Encyclopedia.