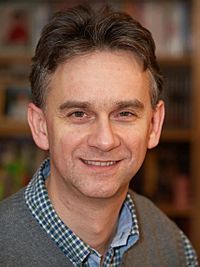 Klaus Ebner (born August 8, 1964) is an Austrian writer of short stories, essays and poetry, and a translator. Born and raised in Vienna, he began writing at an early age. He started sending in stories to magazines in the 1980s, and also published articles and books about computer software after 1989. Ebner's poetry is written in German and Catalan. He is a member of several Austrian writers associations, including the Grazer Autorenversammlung.

His works include cultural essays on Catalan topics, and stories about Jewish traditions. His first book of short stories was printed in 2007. In 2008, Ebner published the short novel Hominide. He has gotten several literary prizes, among them the Viennese Wiener Werkstattpreis in 2007. Austrian critics, such as Wolfgang Ratz, have praised Ebner's prose-style. The writer lives in Vienna with his family.

In the 1980s, he studied Romance languages, German and Translation at the University of Vienna. He also worked for a literary group and a magazine for literature in Vienna. Afterwards he worked as a translator, language teacher and IT project manager. In the 1990s, he published articles and books about software and computer networks; these books were in German, but he also wrote articles in English. In 2001 he wrote a university paper about islamism in Europe, which has been published later in Germany.

After school, Klaus Ebner has begun to write short stories, poetry and radio dramas. He usually published them in magazines of literature and culture. After the year 2004, he published literary texts much more often. Today, Klaus Ebner is an author of fiction (novels, short stories), essays and poems. He writes poetry in German and Catalan. Supported by the Austrian government, he went to Andorra in 2007 and wrote an essay about the country in the Pyrenees.

In 2007, Ebner's poem "a paperman and sick" became one of the Mentioned Poems at the International Poetry Prize Nosside. The jury spoke about the "sadness in big cities", which would be represented in the poem by a paperman whose "meal consists of loneliness". The English translation of the poem goes as follows:

In 2008 Klaus Ebner got the Wiener Werkstattpreis of 2007. The winning short story Der Flügel Last (The Burden of the Wings) shows a seven year old girl who has cancer. The story is told as if the girl would tell it herself. In the winning essay Was blieb vom Weißen Ritter? (What do we still have of the White Knight?), the reader learns about the novel from the Middle Ages Tirant lo Blanch by Joanot Martorell from Valencia. The author mixed his own reading experience with information from history and literature.

Ebner's short stories have many different topics, which, as critic Julia Rafael says, include actual and socially relevant problems. She describes the stories included in the anthology Lose as "somewhat imploding" and says that "phantasms, irony and humor have their place, too". Ebner's metaphors have been described as "going beyond reality without losing ground". The journalist Paul C. Jezek said, Ebner's writing style is characterized by very carefully chosen wording. Each sentence has a melody; his short prose especially sounds lyrical. Jezek compares Ebner's sentences to "Japanese paintings – every word has been chosen with special care". Austrian writer and critic Wolfgang Ratz made a similar observation, underlining "the accurateness of Ebner's speech" and "his love for formal details", while pinpointing the sarcastic undertone of the critical stories.

All content from Kiddle encyclopedia articles (including the article images and facts) can be freely used under Attribution-ShareAlike license, unless stated otherwise. Cite this article:
Klaus Ebner Facts for Kids. Kiddle Encyclopedia.