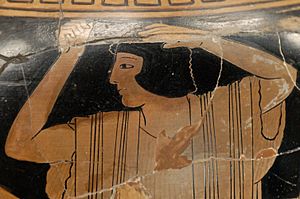 The Kleophrades Painter was a red-figure Athenian vase painter. His real name is unknown. His name is taken from a potter's signature on a vase. He was active from about 510–470 BC. His work is considered some of the finest of the red figure style. He was probably the pupil of Euthymides, one of the red-figure Pioneers. His work is identified by its stylistic traits. He was very productive. More than 100 vases of his work have survived. He worked in both black- and red- figure styles and techniques. He was conservative, often using old-fashioned techniques. His subjects were traditional but with a emphasis on the Trojan War. He preferred painting large vessels such as amphores.

All content from Kiddle encyclopedia articles (including the article images and facts) can be freely used under Attribution-ShareAlike license, unless stated otherwise. Cite this article:
Kleophrades Painter Facts for Kids. Kiddle Encyclopedia.